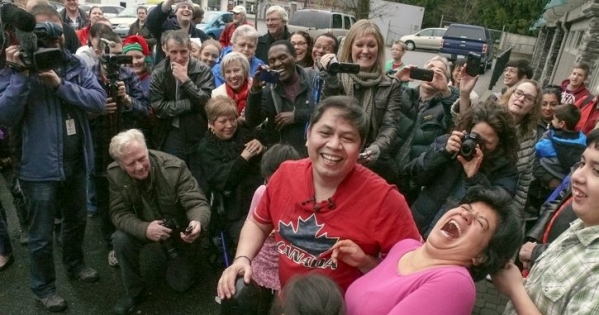 This petition is closed
50 Supporters
Robert G.
started this petition to
John McCallum, Minister of Immigration, Refugees, and Citizenship Canada
Who will forget the joyous scenes at Christmastime of 2015 when - after more than two years in sanctuary at Walnut Grove Lutheran Church - Jose Figueroa was able to walk free and be reunited with his family? If you missed it - you can see it here :

Despite this joyous occasion - the family’s ordeal is far from over. Jose Figueroa still cannot resume his previous employment in Canada and his permanent residency application - approved in principle 12 years ago (!) - has still not been finalized. This has caused untold hardship for his family. In many ways - although he is not confined in sanctuary - Jose Figueroa is still a prisoner. The victimization of this family must end!

The fact is, despite the Minister Jon McCallum's exemption - which brought an end to Jose’s separation from his family - Immigration, Refugees and Citizenship Canada (IRCC) have still not yet finalized the process permanent residence nor has a work permit and a temporary residence permit have been approved for Jose - despite promises to expedite these procedures.

Jose has already complied with the requirements to finalize the permanent residence application. However, he has not been able to resume work due to the lack of these documents which should have been issued with the cancellation of the arrest warrant on December 21, 2015. This makes it impossible for the Figueroa family to resume their normal life and they continue to face undeserved hardship.

Please show your solidarity with the Figueroa family by signing this petition asking the Jon McCallum, the Minister of Immigration, Refugees and Citizenship Canada to press the IRCC to expedite the finalization of the process of permanent residency for Jose Figueroa. This would allow him to return to work within the legal frame that is established by the Immigration and Refugee Protection Act - without the threat of being found inadmissible for working without a work permit or having a defined status.

It is unreasonable that despite of having resided in Canada for more than 18 years, Jose Figueroa is being treated as a newcomer. During their stay in Canada Jose and his wife have been contributing members of the community, paid taxes like everyone else - even when Jose was in sanctuary at Walnut Grove Lutheran Church. Jose and his wife should have become permanent residents of Canada by the end of 2004, but didn't due to mistakes done by government officials. It is time that those mistakes be corrected.

Please sign and share this petition widely. What has happened to the Figueroa family could happen to anyone.

There is clearly no justification for this delay. You can help the Figueroas leave this ordeal behind and feel safe in secure in Canada - leading a normal life. Thank you for signing and PLEASE SHARE WIDELY!

Picture for this petition credited to Dan Ferguson/Langley Times