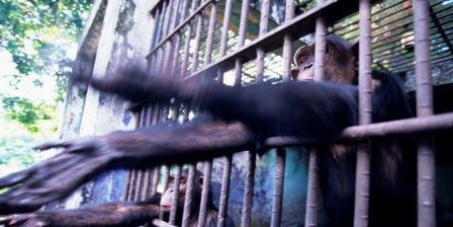 By continuing you agree to receive Avaaz emails. Our Privacy Policy will protect your data and explains how it can be used. You can unsubscribe at any time. If you are under 13 years of age in the USA or under 16 in the rest of the world, please get consent from a parent or guardian before proceeding.
This petition has been created by Christine J. and may not represent the views of the Avaaz community.
x

Undercover investigations over the past 10 years have unearthed an insidious great ape criminal trafficking network. Great apes are in Appendix I of the Convention on International Trade in Endangered Species (CITES), which means that their trade for commercial purposes is strictly prohibited. But the UN estimates almost 3,000 great apes – our closest living evolutionary relatives – are lost every year in trafficking occurrences, as several are killed for every infant captured.

Great apes – chimpanzees, bonobos, gorillas and orangutans – are in great demand in Middle Eastern and East Asian safari parks, zoos and the private menageries of Russian oligarchs and criminal kingpins. They are money-makers for the owners of the parks as a fee-paying public flocks to watch them perform in demeaning skits, wearing colourful costumes while riding bicycles or playing drums. After the show they are locked up in dark, barren cages to await the next performance. Imagine your child or little brother or sister in such a situation. Great apes experience very similar emotions to humans, so they suffer greatly in this cruel slavery condition.

Most shocking is the fact that corrupt national CITES officials in several countries are deeply involved in the trafficking. They doctor fraudulent CITES permits and sell them to traffickers, who use them over and over to export the apes, usually infant orphans whose mothers have been killed for bush meat. Hunters go into the forest with shotguns and ruthlessly blast the adult apes and capture the traumatized infants. Let the CITES Secretariat know that this has to stop, with the Secretariat urging its member states to adhere to Article VIII of the convention: to confiscate the illegally imported apes, prosecute the dealers and corrupt national CITES officials and if possible repatriate the apes back to Africa.

Today: Christine J. is counting on you