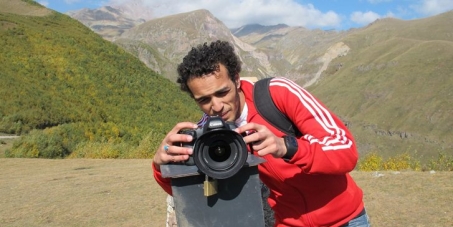 By continuing you agree to receive Avaaz emails. Our Privacy Policy will protect your data and explains how it can be used. You can unsubscribe at any time. If you are under 13 years of age in the USA or under 16 in the rest of the world, please get consent from a parent or guardian before proceeding.
This petition has been created by Sabiha M. and may not represent the views of the Avaaz community.
x

Sign this petition
Sabiha M.
started this petition to
Judge Adly Mansour, Head of Egypt's High Constitutional Court
Mahmoud, known professionally as Shawkan, has been detained without charge since 14 August 2013.

A contributor to publications such as Time Magazine, Die Zeit, Media Group, and online photo agency, Demotix, Shawkan was covering the violent clashes in Rab'aa Square in Cairo last summer between supporters of ousted President Morsi and security forces, when he was arrested with fellow photojournalist Louis Jammes.

Jammes told colleagues that he and Shawkan were beaten by security forces and their cameras taken. They were then herded into the Cairo stadium with protesters and other journalists. Jammes, and several other foreign journalists were later released, but Shawkan was not. He was held in the stadium with 47 other prisoners where he says he was systematically beaten by authorities for three days before being transferred to Tora jail.

Almost 600 days on, Shawkan finds himself in a bleak and frustrating state of limbo. He has not been formally charged, his pre-trial detention has been continually extended and his appeal for release has been denied. He says he feels as if he has been kidnapped, that he has fallen into a black hole, where no-one knows about him and his situation.

Mohammed, Shawkan's brother, and friends have set up the Freedom for Shawkan Facebook page

to raise awareness of his situation and campaign for his release. They are also using the site to post occasional messages that he sends from prison. Mohammed has been allowed to visit his brother several times, but he is worried about his mental health, which he says "is getting worse every day". "I feel very sad for my brother. I do not know what is [his] fate. He is without any guilt... he was doing his job as a news photographer."

By signing this petition we are demanding for his immediate release. Let not a young photojournalists dream of photography be squandered inside of Egypt's jails. Release him, give him his camera and let him continue his passion of photography. Click here to see full text

Today: Sabiha M. is counting on you