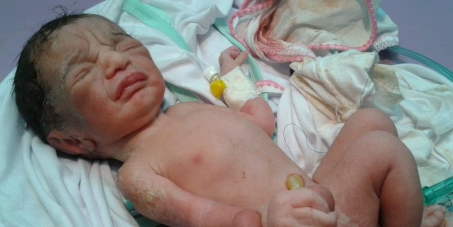 By continuing you agree to receive Avaaz emails. Our Privacy Policy will protect your data and explains how it can be used. You can unsubscribe at any time. If you are under 13 years of age in the USA or under 16 in the rest of the world, please get consent from a parent or guardian before proceeding.
This petition has been created by Lauren C. and may not represent the views of the Avaaz community.
x

Sign this petition
Lauren C.
started this petition to
Chuck Hagel, Secretary of Defense USA, Phillip Hammond, Secretary of Defense UK, Barrack Obama, US President, George W Bush, Former US President, David Cameron, UK Prime Minister, Tony Blair, Former UK Prime Minister, YOU the 99%, Stephen J. Rapp, Ambassador of the Office of Global Criminal Justice
The Iraq war has been over for over a year, but the people of Iraq are far from at peace because of the horrors unfolding every single day- caused by illegal atrocities committed IN OUR NAME.

Depleted Uranium is one of the most dense materials on earth, if you put it on a shell it will cut through a tank like a hot knife through butter. It is also a radioactive, chemically poisonous material that aerosolises on impact; contaminating the water, air and food supplies. It has a half life of 4 and a half BILLION YEARS- it is a problem that is here to stay.

When John Pilger encountered children killed at a greater distance he wrote: "The children's skin had folded back, like parchment, revealing veins and burnt flesh that seeped blood, while the eyes, intact, stared straight ahead. I vomited." (Daily Mirror)

The millions of radioactive uranium oxide particles released when it burns can kill just as surely, but far more terribly. They can even be so tiny they pass through a gas mask, making protection against them impossible. Yet, small is not beautiful. For these invisible killers indiscriminately attack men, women, children and even babies in the womb-and do the gravest harm of all to children and unborn babies.

The children of troops are not safe- after Operation Desert Storm an alarming epidemic of spina bifida and other birth defects were observed in children sired by veterans. If you want to look into this further there is a study called 'The Tiny Victims of Desert Storm' available online.

Since the gulf war, infant mortality rates in Iraq have risen by 600%

Overall, cases of lymphoblastic leukaemia have more than quadrupled with other cancers also increasing 'at an alarming rate'.

Cases of paediatric leukaemia have risen by 300%

These are the innocent victims of the war in Iraq- the occupation is over, but there will be no peace for these families- the unborn children for years to come- until justice is served.

Today: Lauren C. is counting on you