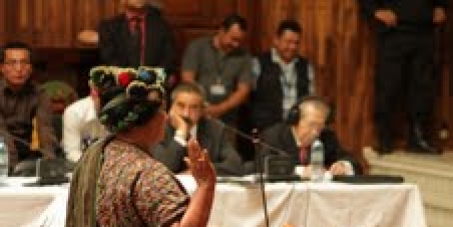 Justice for Genocide in Guatemala!

This petition is closed
50 Supporters
Breaking T.
started this petition to
Judges of the Constitutional Court, Supreme Court of Justice and Appellate Courts

The historic genocide trial in Guatemala against ex-de-facto military President Efrain Rios Montt and the ex-head of his military intelligence, Mauricio Rodriguez Sanchez came to an alarming halt last Thursday when a lower court judge, Judge Patricia Flores, ordered the trial to be annulled. This decision was immediately critiqued by the national and international human rights community declaring that the judge had overstepped her power and had made an illegal decision. The following day, Judge Yassmin Barrios, who is presiding over the trial, temporary suspended the trial until the Constitutional Court clarifies the situation. This clarification is expected soon.

Flores' decision came after more than 100 first hand witnesses and genocide survivors, and experts in international law, forensic anthropology, violence against women, genocide and more gave their testimony. In addition, the plaintiffs in the case, the Association for Justice and Reconciliation, the Centre for Legal Action in Human Rights, and the Public Prosecutor's Office used declassified military archives to prove the military chain of command and that Rios Montt and Rodriguez Sanchez were well aware of the crimes being committed in the Ixil region in '82-'83, when over 1771 Maya indigenous Ixil people were massacred. The prosecution also used video footage to strengthen this argument.

Despite the current set back, witnesses and human rights organizations remain committed to the pursuit of justice and to prove to the world, that yes, there was genocide in Guatemala, what they have known for over 30 years. Sign the petition today to ask the judges of the Guatemalan judicial system to immediately resolve the court injunctions and appeals so that the trial for genocide and crimes against humanity in Guatemala can continue.

Today: Breaking T. is counting on you