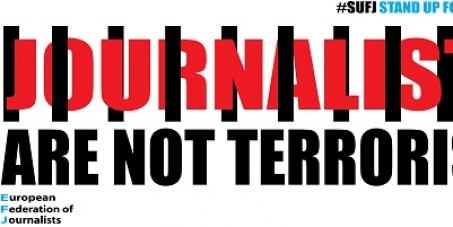 Justice for Journalists in Turkey

By continuing you agree to receive Avaaz emails. Our Privacy Policy will protect your data and explains how it can be used. You can unsubscribe at any time. If you are under 13 years of age in the USA or under 16 in the rest of the world, please get consent from a parent or guardian before proceeding.
This petition has been created by Yuk L. and may not represent the views of the Avaaz community.
x

Sign this petition
Yuk L.
started this petition to
Recep Tayyip Erdoğan, Prime Minister of Turkey
Journalists are not terrorists. The justice system in Turkey has failed its journalists.

This is why we want your support to make an urgent appeal against the life sentences given to four Turkish journalists Füsun Erdoğan, Ziya Ulusoy, Bayram Namaz , Ibrahim Cicek on 2 November. They are facing the life sentences that condemned them to 3.000 years imprisonment under the anti-terrorism law in Turkey. On the same trial, another journalist Sedat Şenoğlu was sentenced to seven-and-a -half year in prison. They were all accused of being members of the Marxist organisation (MLKP) that is considered illegal by the Turkish government.


To date, at least 42 journalists in Turkey were jailed and most of them were charged under the Turkey anti-terrorism law. They have committed no crime but fulfilled their roles as journalists.

Today: Yuk L. is counting on you