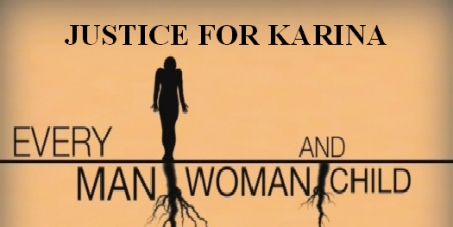 By continuing you agree to receive Avaaz emails. Our Privacy Policy will protect your data and explains how it can be used. You can unsubscribe at any time. If you are under 13 years of age in the USA or under 16 in the rest of the world, please get consent from a parent or guardian before proceeding.
This petition has been created by W. . and may not represent the views of the Avaaz community.
x

Sign this petition
W. .
started this petition to
The people of the world who believe that we are all born equal with Human Rights
On Feb 12th 2013, 5 policemen from Holstebro county, Denmark, came to Karina’s house and forcibly removed her from her bed. There were also 2 doctors, a locksmith and 2 social workers present. Karina called for her mother’s help, but her mother was blocked by the police from aiding her. Karina used her mobile phone for the first time in years to call her mother, her father, her cousin and her sister, Janni. Karina is so ill that she can usually only speak in one or two word sentences, but during her removal she managed to call her father and say: “Help Dad, in my room”, and to her sister: “Help, Janni, I don’t know where they are taking me”. Karina’s mother could not answer her phone because she was surrounded by policemen. Karina was then driven to a hospital in an ambulance. Her parents were not told where Karina was being taken or what reason they had for taking her. No paperwork was given to her parents. Later that day, they got a phone call and were told that Karina was at Hammel Neurocenter and that someone would call them every day at 10 a.m. to tell them how Karina was doing. They were also told that no one could visit Karina for 14 days. On the morning of Feb. 13th, Karina managed to call her mother from her mobile phone. She said: “How can I get out of here? I can’t take this”. (”Hvordan kan jeg komme væk herfra? Jeg kan ikke klare det.”) Then the connection was cut. A few days later, Karina’s parents got a letter from a psychiatrist, Nils Balle Christensen (NBC), which said he would be in charge of Karina’s treatment at Hammel Neurocenter. He also wrote that because “of her condition”, Karina was not allowed visitors for 14 days. That ban on visitors was later extended to three weeks because NBC was on vacation. Nils Balle Christensen works at The Research Clinic for Functional Disorders and Psychosomatics. He and his boss, psychiatrist Per Fink, believe that ME is a functional disorder. In Denmark, a functional disorder is understood to be a psychosomatic illness. The treatments the clinic recommends are: exercise, (GET), cognitive behavioral therapy (CBT) and anti-depressants. The psychiatrists at this clinic have no experience with severely-ill ME patients and we fear that Karina is being treated incorrectly and that their mistreatment of her will lead to a severe and permanent worsening of her condition. There has been no or little contact allowed with Karina’s family, Lawyer, Myalgic Encephalomyelitis Association of Denmark. Various petitions have been set up and signed, letters have been sent to MP’s in the UK, European Union, Danish Ministry of Health, Danish Government of Power and the Denmark Royal Family. Since Feb 12th, 2013 visitation with her family has been sporadic. Information regarding Karina’s health has been censored or silenced. Some updates on her condition is published from time to time basically censored Some inside information tell a different story. Karina believes they are trying to kill her with this line of treatment. Her condition is worse now than before she was hospitalized. All of Karina’s Human Rights have been severed. We have not been provided with the name of her lawyer and/or representative with the United Nations Human Rights and we have no uncensored contact with Karina or any of her representatives.

Today: W. . is counting on you