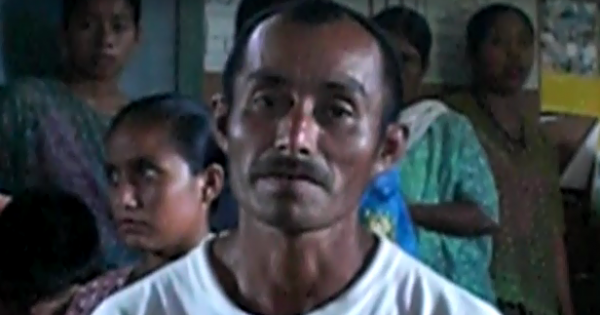 By continuing you agree to receive Avaaz emails. Our Privacy Policy will protect your data and explains how it can be used. You can unsubscribe at any time. If you are under 13 years of age in the USA or under 16 in the rest of the world, please get consent from a parent or guardian before proceeding.
This petition has been created by Guatemala S. and may not represent the views of the Avaaz community.
x

Sign this petition
Guatemala S.
started this petition to
Guatemalan President-Elect Alejandro Giammattei
Pablo Sacrab is a community leader from the indigenous Q'eqchi' village Saquimo.  Sacrab was arrested on December 28, 2010, and has now been in prison for nine years because of the extreme racism and corruption of the Guatemalan government.

Saquimo Setana is a partner of the Guatemala Solidarity Project. More information about the community and the GSP can be found at http://www.guatemalasolidarityproject.org/justice-for-saquimo-setana/ Since we first met the community over ten years ago they have taught us much about nonviolent organizing, love, food, the beauty and importance of protecting diverse ecosystems, and many other things. We hope to learn much more from them - if they can survive.

Over 25 years ago, a group of peasant families bought land in the Coban region of Alta Verapaz, Guatemala. They have documentation to prove the sale. Since this time, the community has lived on the land, cultivating food for their families as well as cardamom to sell.

Beginning just a few years after the purchase, the community became the target of continued attacks. In many of these attacks homes were burned down, residents were assaulted and community leaders were arrested on fraudulent charges. The attacks most commonly occurred between September and November when the community is harvesting the cardamom which it depends on for survival. The harvest was routinely stolen, and much of the forest surrounding the community was clearcut.

The corrupt Guatemalan government supported the attacks, often by participating in them directly and also by arresting community leaders. In prison they have faced beatings, denial of food and denial of medicine. They have been told that this treatment will continue unless they sign false confessions implementing community and national peasant leaders in invented crimes.

The violence and repression has had an extremely harmful impact on children in the community. The school’s elementary teacher told us that his students have difficulty concentrating because they are constantly worried about another attack. The burning of houses and theft of harvests made it difficult for parents to provide their children with appropriate nutrition.

At approximately 3:00AM on November 30, 2013, community leader and legal representative Crisanto Cuc Xol was attacked in his home by Garcia family members and employees. He was beaten, tortured and taken to the police. His house was burned down and entire harvest was stolen. Shortly after this the entire community was violently evicted. Cuc was released six months later after extensive national and international pressure, but Sacrab remains in prison. Community members have not been able to return to their land and remain disbursed and struggling with extreme poverty and hunger.

Today: Guatemala S. is counting on you