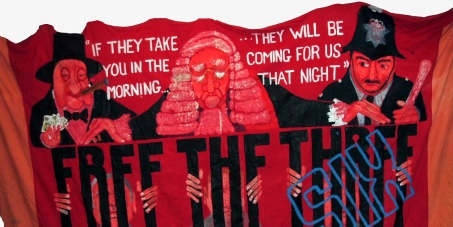 Justice for Shrewsbury Pickets 40 years on

By continuing you agree to receive Avaaz emails. Our Privacy Policy will protect your data and explains how it can be used. You can unsubscribe at any time. If you are under 13 years of age in the USA or under 16 in the rest of the world, please get consent from a parent or guardian before proceeding.
This petition has been created by Peter F. and may not represent the views of the Avaaz community.
x

Sign this petition
Peter F.
started this petition to
MPs because if 100,000 signatures are gathered Parliment has to address the issue.
The trial of the Shrewsbury pickets is a gross miscarriage of justice in the 20th century still unresolved. In the words of John Platts-Mills QC.( leading defence counsel ).
"The trial of the Shrewbury pickets is the only case I know of where the government has ordered a prosecution in defiance of the advice of senior police & prosecution authorites." This is despite two police forces having interveiwed some 800 witnesses & decided that they could not identify any wrong doers. Throughout the picketing the police had accompanied the pickets & congratulated them on their conduct no arrests were made. The home secretary ordered the police to bring proceedings & in February 1973, six months later, thirty one were arrested, of whom 24 were prosecuted.
This trial was conducted after huge industrial unrest during the Heath government. Five striking dockers had to be released from prison due to public protest. The government was determined to redress the situation .
The two pickets that paid the highest price were Des Warren and Eric Tomlinson ( Ricky of Royle Family fame ) who were jailed for 3 and 2 years respectively under an 1875 Conspiracy Act.
210 charges were brought against the pickets the jury disposed of the lesser charges but failed to reach a decision on conspiracy. The jury were told that they would only receive fines; when sentenced the foreman of the jury stormed out shouting it's disgraceful, another juror followed.
Under the Thirty Year Rule in 2006 documents were released but the government withheld key documents claiming they would threaten national security???
My interest is simple I was involved in the Building Workers strike in 1972. I witnessed the trial and its injustice along with many thousands of others. Building workers marched from Wigan to London in 1973 demanding justice, thousands joined them when they reached London.I am a member of the Justice for Shrewsbury Pickets National Committee, which campaigns for the defence of the right to picket and the exoneration of the convicted Shrewsbury pickets.
I remain outraged and continue to fight for justice and would appreciate your support.

Today: Peter F. is counting on you