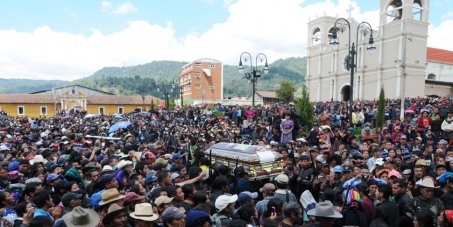 Justice for the Recent Totonicapán Massacre in Guatemala

By continuing you agree to receive Avaaz emails. Our Privacy Policy will protect your data and explains how it can be used. You can unsubscribe at any time. If you are under 13 years of age in the USA or under 16 in the rest of the world, please get consent from a parent or guardian before proceeding.
This petition has been created by Daniel P. and may not represent the views of the Avaaz community.
x

Sign this petition
Daniel P.
started this petition to
The Government of Guatemala, The United Nations Office of the High Commissioner for Human Rights, the Organization of American States, the Commission Against Impunity in Guatemala, the Guatemalan Human Rights Commission
On Thursday, October 4, 2012, the Guatemalan military repressed with deadly force a peaceful protest held by K'iche' Maya communities of the Alcaldía Indígena—the indigenous authority of the 48 Cantones of Totonicapán—by shooting live ammunition indiscriminately at the non-violent demonstrators. The result of the bloodbath was eight deaths and at least 35 wounded people.

As Guatemalans of conscience living abroad and as foreign nationals who are concerned about the perpetuation of injustice and racial inequity in Guatemala, we are compelled to take swift action and demand that the indiscriminate killings of peaceful indigenous demonstrators not go unpunished: we demand that justice be served.

By signing this petition, you make a difference by joining the international demand for justice following this state-led atrocity, and you strengthen the scrutiny that the current government of Guatemala--one that has quickly proven to be militaristic, and tending to criminalize and repress social dissent--should be permanently put under.

Today: Daniel P. is counting on you

Daniel P. needs your help with "Justice for the Recent Totonicapán Massacre in Guatemala". Join Daniel P. and 425 supporters today