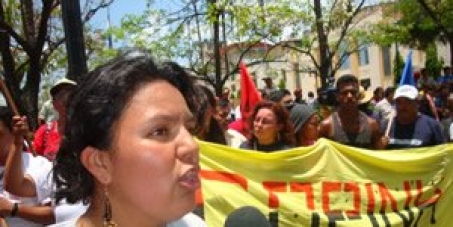 Victory
This petition is closed
387 have signed. Let's get to  500
387 Supporters
Margie T.
started this petition to
Honduran President o Porfirio Lobo, via Secretary of the Government P. Hernandez; Ada Leticia Henríquez, Transparency Official of INA (National Agrarian Institute); Lic. Carlos Ivan Ordoñez Rodriguez, Transparency Coordinator for SERNA (Secretary of Nat
Putting pressure on the Honduran government to get a fair trial for Berta Carceres on June 13, 2013, is very important because the trial takes place in a country that has extremely high levels of corruption, impunity and ongoing violations of human rights, particularly among indigenous peoples, as documented by Amnesty International, Human Rights Watch, the International Federation of Human Rights, and COFADEH (Committee of Relatives of the Disappeared in Honduras), amongst others.
Report this as inappropriate
There was an error when submitting your files and/or report.
Inaccurate Inappropriate language Hate speech Illegal Commercial/spam Offensive