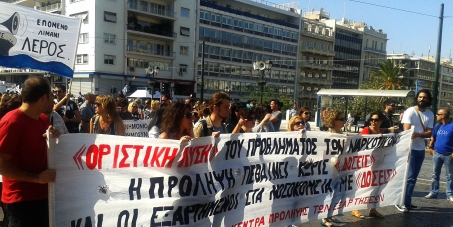 By continuing you agree to receive Avaaz emails. Our Privacy Policy will protect your data and explains how it can be used. You can unsubscribe at any time. If you are under 13 years of age in the USA or under 16 in the rest of the world, please get consent from a parent or guardian before proceeding.
This petition has been created by Prevention C. and may not represent the views of the Avaaz community.
x

In this harsh socio-economic environment, addictive behaviours have rapidly increased, according to surveys as well as practical requests that the Centres' employees have met along the last three years.

The 71 Centers for the Prevention of Drug Addiction and the Promotion of Psychosocial Health constitute a "harbor" for tenths of thousands of people (especially youths) in their uneven daily fight for a mentally, emotionally and psysically healthy life.

Primary prevention of drug use in Greece has been materialized mainly by the 71 Centres for the Prevention of Addictions and the Promotion of Psychosocial Health.

It is worth mentioning that these demanding tasks are performed in under-funding, and under-staffing conditions (at present the total staff nation-wide numbers less than 400 people, with their ratio to the population at approximately 1 to 25.000.)

The Centres are threatened of terminating their social offer due to extreme budget cuts (75% during the last 3 years) and a lack of political will regarding the renewal of the Programmatic Agreement that sees for their operation. Thus, they're heavily in danger of operational death, right in the middle of an all-embracing crisis that calls for supportive public services.

Today: Prevention C. is counting on you