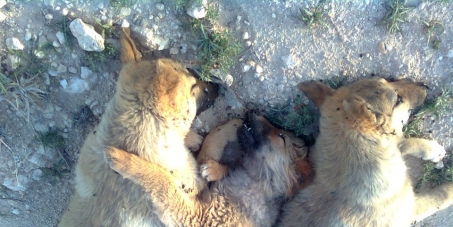 This petition is closed
3,559 Supporters
Patricia M.
started this petition to
Municipality of Greater Amman, Ministry of Agriculture
April 1 again, a very sad day for the Canaan mix breed in Jordan.. the Municipality of Amman went on yet another killing rampage and shot at least 60 dogs and pups. Each dog gets one bullet only, this bullet will either kill him instantly or leave him screaming of pain.
One bullet only...
A truck came and dumped the half dead bodies in front of spectators who witnessed this.
They were killed nameless and unloved..

The Municipality is denying this ever happened.. the person in charge of the Animal welfare department is no where to be reached.. this will not pass quietly.

Animal lovers and volunteers in Jordan are fighting since years the endless battle to raise awareness and respect in the people towards their strays and animals in general.

Strays suffer from all directions in Jordan. Rejected by the local population as little more than vermin, targeted by the government with sniper and Strichnin poisoning campaigns (snipers are paid by the number of corpses they bring back) and tortured by children in the streets, whether by having acid thrown on them, put alive on fire, their tails hacked to the base of the spine or their ears cut off with rough razor blades, with the puppies forced to eat their own ears to “toughen them up”. At cats is driven into deliberately or thrown rocks at and eyes are being pocked out.
Dogs are left for days to die an agonizing death or left paralyzed in the streets when the bullets didn’t quite kill them. Many that are caught by humans suffer immensely, by being beaten, manytimes until their skulls are split, not fed, tied with wires or ropes so short that the dog can’t put his front feet on the ground, or so tight for years that they grow into their necks. As dedicated animal lover myself who, volunteered long enough at the only fundamental private animal shelter/hospital in Jordan, as well as other rescue groups I experienced and heard of on daily basis about cases and incidents that give an horrific insight into the populations' misunderstanding and disrespect of god’s creation.

Today: Patricia M. is counting on you

Patricia M. needs your help with "EVERY WEEK the HORROR STARTS OVER AND OVER AGAIN for Jordan's STRAYS - at least 60 puppies and dogs shot randomly -". Join Patricia M. and 3,559 supporters today