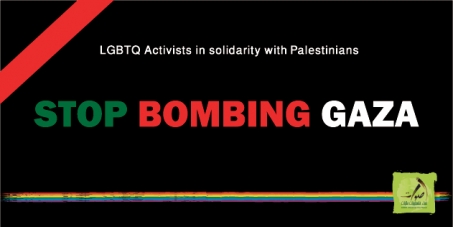 Take Action Against the Bombing of Gaza's Civilians

By continuing you agree to receive Avaaz emails. Our Privacy Policy will protect your data and explains how it can be used. You can unsubscribe at any time. If you are under 13 years of age in the USA or under 16 in the rest of the world, please get consent from a parent or guardian before proceeding.
This petition has been created by Aswat . and may not represent the views of the Avaaz community.
x

Real Queer Liberation Begins with all forms of decolonization

In light of the ongoing brutal Israeli military aggression on Palestinians in Gaza, and the cruelty of Israeli Police Forces in oppressing acts of solidarity and resistance, we LGBTQ activists and organizations call allies around the world to take stand in solidarity with Palestinians and pressure Israel to Stop its aggression on Gazan civilians, End its Occupation of Palestinian Land and End its Apartheid regime.

As of 2 pm today, Wednesday 30 July 2014, Al Mezan Centre for Human Rights (2) was able to verify that at least 1,349 Palestinians have been verified as killed by the IOF(Israeli Occupation Forces); including 341 children and 176 women. According to Al Mezan's initial investigations 1,088 (i.e. 80.7%) of the victims are civilians. Many others were people known to be affiliated by Palestinian factions, but not taking part in any hostilities. At least 713 (52.9%; 232 children and 148 women) were killed inside their houses; and two other disabled women were killed in an attack on a rehabilitation NGO's office. Another 157 people were killed in the vicinity of their houses; including in situations where they were trying to flee from their homes as a result of IOF attacks.

Today Israel mobilised 16,000 additional reservists to bolster forces fighting in Gaza as Washington gave its ally the go-ahead to raid stocks of emergency US weapons stored on Israeli soil.(3)

The torture and the brutal murder of young Mohammed Abu Khdeir in Jerusalem a few weeks ago, the “Price tag” actions against Palestinian homes and holy places, the house demolitions and the ongoing assault and murder in the Gaza strip are all different forms of the Zionist occupation and should all come to an end!

In particular, we urge activists to:

Join demonstrations against the Occupation and the current aggression on Gaza;

Use your social media to increase awareness of the situation in Palestine;

Queer activists must mobilize their communities around the world to take action to hold Israel accountable for its continued collective punishment and war crimes against Palestinian civilians.

"None of us is free until all of us are free." Martin Luther King, Jr.

Today: Aswat . is counting on you

Aswat . needs your help with "Take Action Against the Bombing of Gaza's Civilians". Join Aswat . and 1,440 supporters today