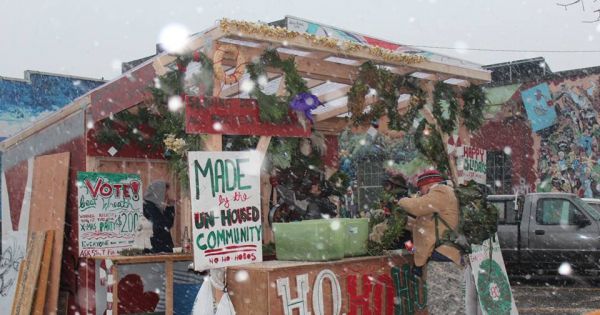 By continuing you agree to receive Avaaz emails. Our Privacy Policy will protect your data and explains how it can be used. You can unsubscribe at any time.
This petition has been created by Ho-Ho-Hobos H. and may not represent the views of the Avaaz community.

Sign this petition
Ho-Ho-Hobos H.
started this petition to
LOTT Clean Water Alliance
Every December since 2015, Ho-Ho-Hobos has provided jobs on the streets by employing homeless folks to make and sell Christmas wreaths.  Our model is to work with the street community to empower unhoused leadership.  By engaging people not only making wreaths (paid), but also organizing and facilitating the project (unpaid), we foster a sense of ownership, self-worth, and pride.  What started one winter in a fireworks stand on loan from a Nisqually elder is now coming into our 5th season.  Along the way we've had a small impact in the lives of hundreds of wreath makers, and a much larger impact on a smaller handful of fully engaged participants.  In addition, the project has served as an emergency aid station, donation drop, self-organized pocket shelter, gear locker for folks seeking work, and used wreath sales to fund a homeless-led laundry drive, resuscitating derelict camp blankets for redistribution.  We've often been told, and we believe, that the project has a positive ripple effect throughout the homeless community.

But our little plywood box has never and can never be anything but the tiniest blip in the face of such enormous need.  After four successful seasons and a few different iterations, we've learned a lot and we're ready to expand, to create more jobs, better jobs, dignity, and self-resilience.  We've designed a great toy, which can be painted and assembled with the same creativity and skill as the wreaths, but which is ultimately a shelf-stable, more marketable product, which can fetch a higher wage to the worker.  We have the skills, experience, creativity and love to create a real Santa's workshop: giving meaningful employment for the unhoused in the form of crafting toys and joy to the world.

We have the capacity to do all of this.  The only thing we lack is access to a dry, securable space, preferably with a power cord.  There is an ideal space, at an ideal location, which has already been paid for by the taxpayers, is currently sitting vacant, and has been for more than a decade.

It is a small shed on the east side of 516 NE Washington Street, the abandon Fish and Wildlife building.  The entire compound has been vacant and boarded for over 10 years.  If this were a federal building, it would be subject to Title V of the McKinney-Vento Act, which requires federal agencies to identify and make available surplus properties for use by state, local and non-profit agencies specifically for the assistance of homeless people (this is how, for example, the Salvation Army was able to build the biggest shelter west of the Mississippi, the Bell Shelter, housing 500 people every night, without costing the taxpayer: by recycling unused infrastructure for the public good).  Many states have instated similar laws, but not Washington.  So after this building was abandon more than a decade ago, it was able to sit unused for years before being sold for 1/3rd the assessed value to LOTT Clean Water Alliance: a non-profit corporation formed by 4 local governments (Lacey, Olympia, Tumwater, Thurston County).  Since this 2013 sale, the entire compound has continued to sit abandon and unused.

For our purposes, the small shed on the east side of the building would be an ideal seasonal workshop.  It is the right size and setup for our needs, and partitioned from the main building.  The nearest neighbor is the Union Gospel Mission, which Ho-Ho-Hobos has always had a good relationship with, and which serves as a natural meeting place for the community.   It is two blocks from the transit center and one block from to city's homeless mitigation site.  It has parking, but is off of the main street.  It was paid for (twice) by the tax paying public, many of whom are now experiencing homelessness, and it has been abandon for over 10 years.

We understand that the value of meaningful employment for unhoused folks (building honest skills, self efficacy, empowerment, having a constructive way to fit into the larger community, etc...) outweighs the value of a vacant, locked shed continuing to deteriorate in neglect.


We, the people, believe it is in the public good for Ho-Ho-Hobos to steward said shed this coming holiday season.  We are sincerely pleading with LOTT, local governments, and Santa, so that our community may self-organize to grapple with the emergency needs of homelessness.