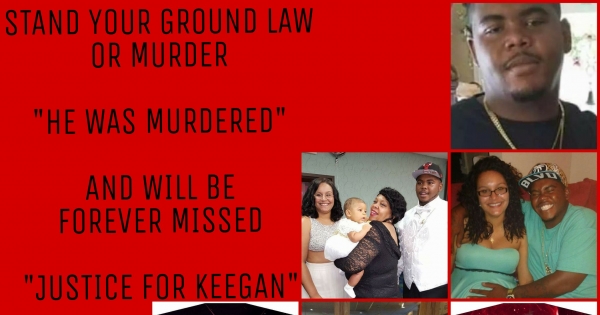 By continuing you agree to receive Avaaz emails. Our Privacy Policy will protect your data and explains how it can be used. You can unsubscribe at any time. If you are under 13 years of age in the USA or under 16 in the rest of the world, please get consent from a parent or guardian before proceeding.
This petition has been created by Vietta H. and may not represent the views of the Avaaz community.
x

Sign this petition
Vietta H.
started this petition to
Lenny Curry: Mayor of Jacksonville Florida Melissa Nelson: State Attorney , Tom Mangan: Prosecutors Office Jacksonville Florida
On July 20, 2017 Keegan Von Roberts was murdered in cold blood. The man responsible for his death is a man named Michael Centanni. On this day Keegan was on his own property when approached by his murderer who was armed yet again as this was not the first time Keegans murderer had approached him on his property for conflict all over a simple dislike of Keegan and the person he was. No one is really sure why this dislike was so strong; not Keegan or his family. For a while we just figured it was the strong minded man and person Keegan was that simply just bothered this man but we figured over time it would cease as there was no real issue at hand between the two. Its not abnormal in today's world for people to be disliked simply for being a good person on the right path; we figured it was simply that that discomforted Keegans murderer. Many times Keegan had just walked away or avoided the constant harassment of his murderer but this day he finally stood his ground for the safety of his wife, his little girl, and his unborn child requesting that the harassment and scare tactics just stop. As any person would be Keegan was tired of it but standing up for himself and his family this day caused his life to be taken away; an altercation broke out and as Keegan was defending himself he was shot and murdered in cold blood laying there to die in front of his wife. Keegans murderer was never arrested due to the "Stand Your Ground Law" in Florida. Its hard for family, friends, associates or even strangers to grasp how a man can go through the constant harrassment over time always being the bigger person and walking away could lose his life to this same man. A senseless careless person who eventually murdered Keegan and is walking free to continue to live his life and possibly do this again to another individual whom he may simply "just not like". Michael Centanni approached Keegan Von Roberts on his own property three separate times and was armed all three times all with the intent to do dangerous harm always telling Keegan he did not like him and was going to kill him one day; we are all wondering how this is not pre‐meditated murder. A man has lost his life due to not being liked by someone, wow what a world it would be if everyone started shooting and killing all the people they "just don't like" in cold blood and remained walking free to live life. If you knew Keegan he was a laid back genuine individual who just loved everyone, he was full of life, was an amazing father and husband, and such a gift to anyone who knew him, he never bothered anyone and kept to himself most of the time. Keegan stayed busy with work and family as taking care of his family was key to him. Keegan was a husband, a father, a son, a uncle, a brother, a friend, a loved one and a very special man to so many people. Left behind are all these people wanting "JUSTICE FOR KEEGAN". His wife is left to raise her children alone, his daughter will continue life without her father never having again what she has had since birth, his unborn child will never meet him. His children will grow up having to understand their dad died "for nothing"; wow what a thing for children to have to grasp. His mother, his father, his sister, and his big brother will always have a part of their hearts missing. We ask that you put yourself in Keegans shoes or his families shoes and just try and imagine just a small piece of what his life was like, how it ended, and why it ended. Finally standing his ground Keegan was murdered and The stand your ground law let his murderer go free; wow what a law that definitely seems to have a backwards purpose. The state of Florida is attempting to justify his murder with this law all due to a small part of his car being parked on the sidewalk. His murderer lives all the way across the street. We wont let the state brush this under the rug all because they don't have time or do not want to deal with it. If your mindset is where all of ours is after reading this we ask that you please sign this petition and share as we all just want "JUSTICE FOR KEEGAN".

Thank You and God Bless