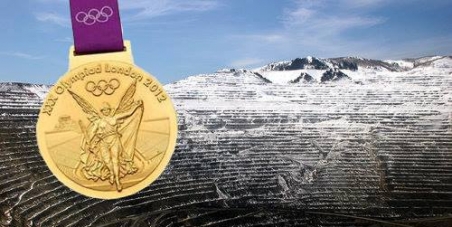 Let Olympic gold medals no longer be a source of environmental and social injustice!

By continuing you agree to receive Avaaz emails. Our Privacy Policy will protect your data and explains how it can be used. You can unsubscribe at any time. If you are under 13 years of age in the USA or under 16 in the rest of the world, please get consent from a parent or guardian before proceeding.
This petition has been created by Inge B. and may not represent the views of the Avaaz community.
x

Sign this petition
Inge B.
started this petition to
The International Olympic Committee, chaired by Thomas Bach

The London 2012 Olympic Games were to be the “greenest”, most sustainable games ever. According to the Sustainable Sourcing Code of the London Organising Committee for the Olympic Games, sustainability was to be taken into account at every decision-making level.

In spite of this, Rio Tinto supplied the gold for the gold medals for the London 2012 Olympic Games. Rio Tinto is a British-Australian mining corporation with a bad reputation worldwide: with over 8000 complaints pending, including allegations of rape, violence, forced evictions and military repression.

Rio Tinto was certified by the Responsible Jewellery Council two weeks before they were selected to supply the gold for the 2012 Olympic medals, without an independent third party audit carried out by a neutral and non-governmental party.

Most of the gold that was used for the medals at the London 2012 Olympics can be traced back to Rio Tinto's Kennecott Bingham Canyon mine in Utah, USA. The Kennecott mine is an open-pit mine, which looks like a crater in the earth. Accounting for 0,25% of the jobs in the area but over 30% of the pollution, the Kennecott mine is Utah’s number one emitter of harmful toxins such as mercury and lead, as well as dust. It is estimated that between 100 and 200 Utahns die prematurely every year as a direct result of the air pollution caused by the mine.

The remainder of the gold used for the 2012 London Olympic medals came from Rio Tinto's Oyu Tolgoi mine in Mongolia. It is located in the Gobi desert, a vulnerable ecosystem where water is scarce. However, the Oyu Tolgoi mine is pumping thousands of litres of water per second from the nearby Gunii Hooloi aquifer, and already, groundwater levels are depleting. Local pastoralists are also losing access to pastures and water, without proper compensation. Furthermore, they are not properly educated on the health hazards associated with large-scale open-pit mining, while concentrations of dust are already increasing in the air.

Rio Tinto donated all the 4700 medals to the Olympic Games in 2012, in addition to paying sixteen million American dollars as a sponsor.

The Olympic Committee for the London 2012 games claimed that all sponsors and partners would have to abide by strict social, environmental and ethical guidelines. It is irresponsible, then, that Rio Tinto was chosen to supply the gold medals for the games. We request that at the Rio de Janeiro Olympics in 2016, no medals that are sponsored, or contain gold extracted by, Rio Tinto or any other company using large-scale open pit mining, be awarded. This is significant not only to ensure a positive image of the Olympic Games, but also to support millions of people worldwide who are living with the adverse consequences of large-scale open-pit mining.

We would suggest a few alternatives to traditional gold medals:

1. Use less gold per medal. The gold medals in London 2012 were the largest in history. There is no need for medals to grow even larger: their symbolic value will be appreciated even when size and volume are reduced. We are aware that the gold medals in 2012 contained 6% gold and 92,5% silver. However, substituting gold with silver is not an alternative, as silver is often mined under similarly ecologically and socially destructive circumstances as gold.

2. Use recycled gold. Supplies of gold “above ground” – extracted in the past – are in fact larger than the quantity of gold that remains underground. What is more, 1 kilogramme of e-waste, such as old computers and cell phones, contains more gold than one kilo of ore extracted from mines. It makes sense, therefore, to support initiatives that recycle this vast quantity of gold available to us right here.

3. Use Fairtrade gold. Fairtrade gold is mined in small-scale, artisanal gold mines where working conditions and the environment are taken into consideration. While no alternative to the problem of large-scale mining, Fairtrade gold is the most social and sustainable option available for newly extracted gold.

Today: Inge B. is counting on you

Inge B. needs your help with "Let Olympic gold medals no longer be a source of environmental and social injustice!". Join Inge B. and 582 supporters today