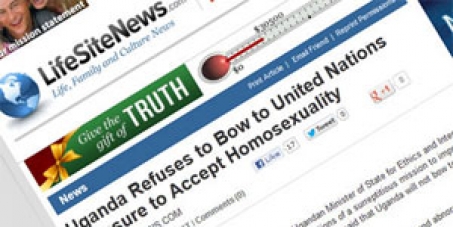 By continuing you agree to receive Avaaz emails. Our Privacy Policy will protect your data and explains how it can be used. You can unsubscribe at any time. If you are under 13 years of age in the USA or under 16 in the rest of the world, please get consent from a parent or guardian before proceeding.
This petition has been created by Mercedes A. and may not represent the views of the Avaaz community.
x

The Canadian website LifeSiteNews (LSN) has been called out for promoting an organization identified as aggressively targeting the African continent with anti-gay lobbying, Human Life International (HLI). In doing this, LSN has (consciously or not) been supporting and promoting a group that has fomented anti-gay hatred which leads toward heavy-handed legislation like Uganda's Anti-Homosexuality Bill.

A detailed analysis of LifeSiteNews' partnership with Human Life International and HLI's efforts to push for anti-gay legislation in Africa can be found at http://www.bilerico.com/2013/02/an_open_letter_to_lifesitenews_regarding_anti-gay.php
Report this as inappropriate
There was an error when submitting your files and/or report.
Inaccurate Inappropriate language Hate speech Illegal Commercial/spam Offensive