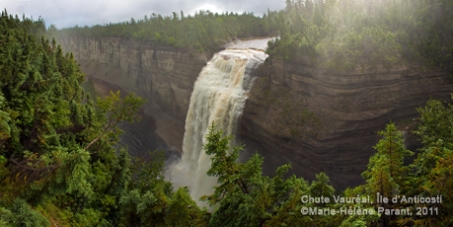 By continuing you agree to receive Avaaz emails. Our Privacy Policy will protect your data and explains how it can be used. You can unsubscribe at any time. If you are under 13 years of age in the USA or under 16 in the rest of the world, please get consent from a parent or guardian before proceeding.
This petition has been created by Marie-Hélène P. and may not represent the views of the Avaaz community.
x

Sign this petition
Marie-Hélène P.
started this petition to
Tous les partis politiques du Québec et son gouvernement
Anticosti Island, located in the St. Lawrence Gulf in Québec, is named the "Pearl of St Lawrence" for the splendor of its breathtaking scenery. The Island is a refuge for several endangered species of terrestrial flora and fauna as well as being rich in diverse aquatic life offshore. The long reefs located here are among the ten most ecologically sensitive areas in the St. Lawrence Gulf and are of crucial importance for the survival of all aquatic organisms in the Atlantic Ocean.

A company is currently clear cutting 150 km of open forest near the Grand-Lac-Salé Ecological Reserve, (established on January 24, 1996), located on the south shore of Anticosti Island. Shale Gas & oil exploration activities are underway without any independent environmental impact assessment and threatens the survival of endangered species.

The consequences of fracturing shale rock to extract oil and gas are known to contaminate groundwater. Also, any event of a marine spill would affect the much larger ecosystem of all the Atlantic Provinces .

Life on the island and in the Gulf of St. Lawrence is at stake: the health of sensitive wildlife biological systems such as marine algae, plankton, microscopic invertebrates, crustaceans, turtles, fish, birds, marine and terrestrial mammals, the quality of fresh and salt water, and the unique geology of the island with fossils dating back 450 million years.

It is urgent that we collectively decide the wise use our future energy resources. Demand the Québec government and political parties to declare a moratorium of oil and gas exploration on Anticosti Island. For more information and photographs, www.ile-anticosti.ca