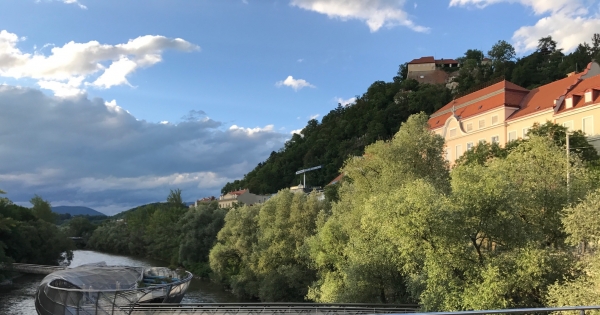 By continuing you agree to receive Avaaz emails. Our Privacy Policy will protect your data and explains how it can be used. You can unsubscribe at any time.
This petition has been created by Richard P. and may not represent the views of the Avaaz community.

Sign this petition
Richard P.
started this petition to
Siegfried Nagl, Mayor of Graz, Austria
Ten thousand safe, healthy trees will be felled near the centre of Graz, Austria in October 2017 to enable construction of a massive 5‐km sewerage pipe (Zentralspeicherkanal) along the river Mur. All trees on the left bank from Puntigam in the south to the city center and possibly to Kalvarienbrücke in the north will be removed. Thousands are already gone.

Many trees are 10‐20m tall and 50‐100 years old. Diverse native species are represented including acacia, alder, ash, birch, chestnut, elder, elm, linden, maple, poplar, and willow. The replacement trees will be smaller (their roots could damage the new concrete) and fewer (higher water means less space) and it will be many years before they are planted and grow.

With every felled tree, Graz is breaking its own tree‐protection bylaws. These emphasize the importance of trees for local and global climate, biodiversity, aesthetics, and public well‐being. In the 21st century, it is never justified to clear the equivalent of a square kilometre of forest in a metropolitan area‐‐regardless of the reason.

This unprecedented environmental destruction is an international scandal and must be stopped. The thousands of trees, the many animals and birds that depend on them, and the free‐flowing river ecology must be saved for future generations.

Particulate matter air pollution levels are high in Graz due to surrounding hills and lack of wind. A 2008 study found PM is shortening life expectancy in Graz by 17 months. Possible solutions include planting trees (whose leaves and trunks absorb PM) and reducing car traffic. Graz is doing the opposite and endangering the lives of its own citizens. The threatened trees line and beautify Graz's main cycle track‐‐used by thousands of cyclists every day.

The new sewerage pipe, we are told, is necessary because a hydroelectric plant (Murkraftwerk), currently under construction downstream of the centre, will raise the water level, impeding flow from existing drains. The plant, we are told, is needed to power electric cars. In fact, Austria has too much electricity. National generation capacity is 23 GW of which 12 GW is sustainable. Peak consumption in winter is only 10 GW, of which the new plant will produce a mere 4 MW, equivalent to 2‐3 windmills. The pipe will carry only part of the untreated sewage that currently flows into the river during heavy rain; the remainder will enter the new reservoir!

To push the project through, authorities misled decision makers (including city councillors) and the public on central issues. Publicly funded environmental impact studies were ignored or illegally withheld. For example, the greenwash homepage at murkraftwerk.at claims that 839 trees will be felled. In fact, 839 registered trees will be felled; thousands of trees are not registered. Distortions of this kind are undermining the credibility of public authorities, which is undermining democracy.

The project will cost €160m and produce less than 1% of electricity in the state of Styria (Steiermark). This is a staggering misuse of public money for a city of 300,000 people whose debt currently exceeds a billion Euros not including this project. Never before has Graz wasted so much money or destroyed so much nature in a single project.

Proponents argue the river is already a product of human intervention and used to be much dirtier. But that is no reason to turn a beautiful tree‐lined river into a dirty dam fed by a concrete culvert. This is postwar thinking based on lower populations, quasi‐infinite natural resources, and unlimited economic growth. As global population approaches 10 billion, ecosystems are increasingly stressed and threatened. Species are dying out 100 to 1000 times faster than without humans (Holocene extinction). To survive the 21st century, we need to promote biodiversity, ecological balance, and natural resource management.

Graz should cut its losses and abandon both the hydro and the pipe. Instead of the hydro, we need programs to reduce electricity consumption coupled with a modern, decentral combination of solar, wind, geothermal and/or hydrokinetic (without a dam). A wind farm can generate more power (especially in winter) at a lower cost (both financial and environmental). Instead of the pipe, we need to separate sewage from rainwater and implement well‐known modern principles of stormwater and integrated water management.

Green, sustainable, efficient sources of energy are urgently needed to mitigate climate change. A project that permanently changes or destroys ecosystems is none of these things. You don't save the climate by clearing a forest!

Further information in English:
parncutt.org/mur1.html
Report this as inappropriate
There was an error when submitting your files and/or report.
Inaccurate Inappropriate language Hate speech Illegal Commercial/spam Offensive
×

Today: Richard P. is counting on you