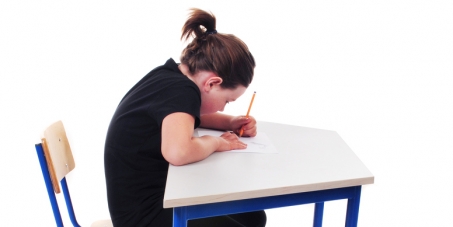 By continuing you agree to receive Avaaz emails. Our Privacy Policy will protect your data and explains how it can be used. You can unsubscribe at any time. If you are under 13 years of age in the USA or under 16 in the rest of the world, please get consent from a parent or guardian before proceeding.
This petition has been created by Richard B. and may not represent the views of the Avaaz community.
x

According to National Association for Back Pain UK backward sloping school chairs are the major cause for back pain in adults by directly causing poor posture in most children. Yet all schools in Ireland still use them and even the new chairs that are replacing old ones have a backward sloping seat. It is the Irish Government's specification that all school chairs must slope back because this makes them stackable, but it also causes poor posture in nearly every child.

The backward sloping base of the seat prevents the children bending naturally at the hip joints and forces them to bend their spines instead. Children have no choice but to endure these chairs for over 15,000 hours while at school and is the main reason why the majority of adults get back or neck pain either at school or after they leave.

At present the National Standards Authority Ireland has put a proposal called the prEN 1729 which proposes to change all school Chairs to make them slope backwards from the present -5 degrees to -10 degrees. Even now over 20% of children under the age of 16 have back pain and this is bound to make the problem much worse. Only the Irish government can change this. I am a father of two children who are being educated in Ireland. More information at www.alexander.ie/children.html

Today: Richard B. is counting on you