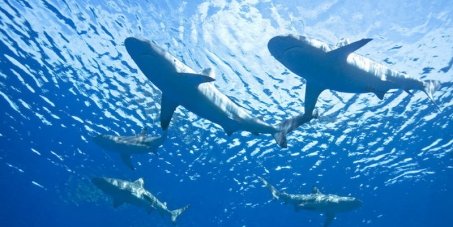 By continuing you agree to receive Avaaz emails. Our Privacy Policy will protect your data and explains how it can be used. You can unsubscribe at any time. If you are under 13 years of age in the USA or under 16 in the rest of the world, please get consent from a parent or guardian before proceeding.
This petition has been created by Matthew P. and may not represent the views of the Avaaz community.
x

Every year, it is estimated that between 63 and 273 million sharks are killed (the average is 100 million). These sharks are primarily killed for their fins to supply the high demand for shark fin soup.
Every year, it is claimed that 6.4% to 7.9% of the global shark population is killed. This is above the 4.9% which some academics believe would enable shark populations to recover from current overfishing.
80% of global fisheries are fished at, or close to, their capacity.
Global fishing fleets are 250% larger than the oceans can sustain.
Technology has led to irresponsible and often illegal fishing. Long lining, drift nets, gill nets and trawlers are all used to deplete the oceans of its life. Over 43 million tonnes of by-catch is recorded each year and illegal fishing is worth $9 billion a year.
Over the last few years, the global trade in shark fins has been increasing yearly by 5% to 15%.
The demand for shark fins is extraordinarily high. Fishermen target all shark species, regardless of gender or age.
Shark fins are worth around 500 Euros per kilo. Shark meat, which is not palatable to consumers due to fact that sharks retain urea in their blood and tissues as part of osmoregulation, is only valued at 10 Euros per kilo. This often means that some fishermen are more willing to just take a shark's fins than the whole carcass.

According to the IUCN (International Union for Conservation of Nature), 30% of all open ocean shark species are at risk of extinction.
50 shark species are now listed on the IUCN's Red List and have been classified as being Vulnerable, Endangered or Critically Endangered. Academics also claim that 63 species of shark will soon be placed on the IUCN Red List, and a further 199 species of shark are classified at "Data Deficent," therefore we do not know enough about their populations and some may be close to extinction without us knowing.
97% to 99% of certain regional shark populations in the North Atlantic have gone.
Sharks cannot simply cope with the demand that is being put on them. Many shark species take up to 20 years to reach sexual maturity. In addition to this, they often have long gestation periods (18 to 22 months in some cases), long birth intervals (2 to 3 years) and some shark species give birth to a small number of pups (Great White Sharks give birth to an average of 2 to 10 pups with each pregnancy). Sharks cannot reproduce quickly enough to keep up with the demands being placed upon them by global fisheries and consumers.
At Chesapeake Bay in the USA, 35 years of overfishing big shark species caused the collapse of the scallop fisheries in 2004. It was believed that the massive reduction in local bull, dusky and smooth hammerhead sharks (99%), caused skate, ray and small shark populations to explode and decimate the local scallop population.

REASON #3 - THE TRADE FOR SHARK FINS

An estimated 100 million sharks are killed each year, mostly to meet the demand for shark fin soup. That's over 1.9 million sharks killed every week. Shark fin restaurant owners in Bangkok’s Chinatown alone have claimed to be selling more than 20,000 bowls of shark fin soup per month.
Shark fin soup is a traditional South East and East Asian delicacy associated with prosperity, health and good fortune.
In some parts of the world, the price of a bowl of shark fin soup can range from $65 USD to $150 USD.
Shark fin soup was once a staple dish for Emperors and the Aristocracy in South East and East Asia dating back to the Ming dynasty 2,000 years ago. The dish went from being eaten by a few million every year in the 1980s, to being eaten by 300 million people ever year around the world today.
Once reserved for special occasions, shark fin is now commonly consumed in major cities as an indication of stature – with its prevalence highlighted by the fact it is even served at low cost buffets.
Hosts serve shark fin soup to honor their guests and fear their guests would be insulted and they would be considered “cheap” (or lose face) if shark fin soup is not served.
Shark fin soup has virtually no nutritional value and the shark fins add no taste to the dish. It needs stock to add flavour to it.
The vitality of the Chinese economy, particularly the emerging middle class, has driven demand for shark fin soup since 1987.
The sale of shark fin products is legal throughout the world. The Chinese restaurant, the health food store, even the beauty salon down the street may be selling shark products.
Over 140 countries worldwide are involved in the business of trading in shark fins.
50% to 80% of all shark fins go through Hong Kong. A 1/3 of all these fins come from Europe.
It is important to note that conservation work being carried by charities in China and the rest of South East and East Asia is beginning to have an impact upon the consumption of shark fin soup.
Fin Free Manchester currently knows of 9 restaurants in Manchester which have shark fin soup for sale on their menus, with prices ranging from £6.00 up to £14.50. Whether the soup is real or not has yet to be established.
Shark fin soup is prized by some for its slippery and glutinous texture.
Regarded as a tonic food and an aphrodisiac by some cultures, shark fins are believed to strengthen the internal organs and stop aging. It is also claimed to transfer savagery and power of a shark to the eater.

Shark finning is a cruel and wasteful process in which a shark’s fins are removed using a hot knife from the shark at sea and retained, while the remainder of the often still-living body is discarded back into the ocean.
Unable to swim or pass water across its gills, the shark dies either from suffocation, bloodloss or predation by other species. Between 95% to 98% of the carcass is wasted.
Only the fins are kept because shark fins are now one of the most expensive seafood items in the world. Shark fins are valud at around 500 Euros per kilo, whilst the meat is worth only 10 Euros per kilo. As a result, it is economically beneficial to use the limited space on a vessel to store a high-priced product such as fins than it is to fill it with the low-priced meat of the sharks’ body.
Despite the fact that over the last 10 years, many jurisdictions around the world have implemented anti-finning policies, such as Canada, Europe, Australia and the United States of America, the practice of shark finning still continues in many parts of the world and therefore, sharks continue to be killed at an unsustainable rate. In countries like Mozambique, where 80% of the population live below the poverty line, it is no wonder that people try to make as much money as they can through shark finning.

Mercury has always been present in our atmosphere (volcanoes and wild fires). However, 2/3 of the mercury in our atmosphere results from the burning of coal and from waste incinerators. Mercury falls to the ground, mostly through rain and enters the oceans either directly, or through runoff.
Phytoplankton (tiny organisms) absorb the mercury and from here, the level of mercury becomes more concentrated as it moves up the food chain. As apex predators, sharks accumulate high levels of methyl-mercury in their bodies.
Sharks retain mercury in their cartilidge and this make their fins particularly potent as they are primarily made up of cartilidge.
The levels of mercury in sharks can be so high that a single shark steak can cause poisioning.
Eating shark fin soup or shark meat in general could lead to mercury poisoning and consequently sterility, birth defects and nervous system issues.
In Bangkok, investigators from the conservation charity WildAid found that 70% of the shark fins that they purchased in the Thai capital contained extremely high levels of mercury.
The US Food and Drug Association, US Environmental Protection Agency, World Health Organisation, Food and Agriculture organisation of the United Nations and the New York Department of Health all warn against consuming shark products.
In 2005, the conservation charity WildAid found that 1/3 of shark fins from key markets in Singapore, China, Hong Kong and Thailand contained levels of mercury in excess of the acceptable levels set by both the World Health Organisation and the US Food and Drug Association.
Shark fins studied at the University of Hong Kong contained 5.84 parts per million (ppm) of mercury, compared to a maximum permitted level of 0.5 ppm. The high presence of mercury was confirmed in independent tests conducted by two state-related labs in Thailand, and the findings are also reflected in US, Australian, and New Zealand governmental reports.

As the apex predators of the oceans, the role of sharks is to keep other marine life in healthy balance and to regulate the oceans. Sharks kill the ill, weak and the dead.
Sharks play a vital role at the top of the food chain by maintaining balance in the oceans. Destroying shark populations could destroy our oceans and our life support system.
Sharks have widespread global distribution, are highly migratory and play a vital role in maintaining the health of ocean ecosystems.
Sharks are a critical component in an ecosystem that provides 1/3 of our world with food, produces more oxygen than all the rainforests combined, removes half of the atmosphere’s man-made carbon dioxide (greenhouse gas), and controls our planet’s temperature and weather.
The oceans are the most important ecosystem on the planet, and our best defense against global warming, containing life that absorbs most of the carbon dioxide (global warming gas) that we put into the atmosphere, converting it into between 50% to 70% of the oxygen we breathe.