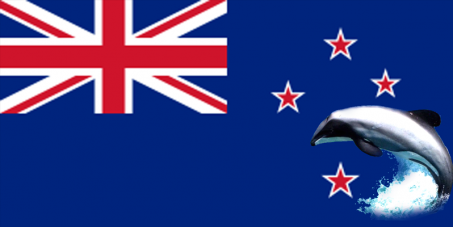 Make the Maui Dolphin the National Symbol of New Zealand

By continuing you agree to receive Avaaz emails. Our Privacy Policy will protect your data and explains how it can be used. You can unsubscribe at any time. If you are under 13 years of age in the USA or under 16 in the rest of the world, please get consent from a parent or guardian before proceeding.
This petition has been created by Shining C. and may not represent the views of the Avaaz community.
x

The Maui's and Hector's Dolphin are critically endangered. They are the world's smallest and rarest marine dolphin species. Fishing with gill nets and trawling have driven them to the very edge of extinction.

WHAT WE WANT: Full protection against gillnets and trawling across the dolphins' habitat to a water depth of 100 m

With only 55 remaining individuals it's the world's most critically endangered cetacean in the world. Gillnetting and trawling kill an estimated five Maui's dolphins each year. Any further deaths would certainly push this species further into the abyss.

At last year's meeting by the IUCN, the New Zealand Government's position was to oppose the IUCN motion to ban gill and trawl nets out to the 100 metre contour.

Fishing with gillnets and trawlnets is the primary cause of death among the last surviving Maui’s dolphins. Between them they KILL ABOUT NINETY PERCENT of the tiny population that's left every year - that’s over 75 times more than the sustainable limit. This is because only a small fraction of the dolphins' range is protected.

The New Zealand Seafood Industry: Seafood New Zealand - http://www.seafoodnewzealand.org.nz/ - is the industry body that has obstructed the dolphins' protection for decades and continues to fight every conservation effort.

We must take action and become the Voice of Maui's and Hector's dolphins and make them the national symbol of New Zealand. Only if the Prime Minister and the Minister of Primary Industries of New Zealand realise how proud they can be of being graced by the presence of this dolphin species in their waters they can really have the passion and will to save them. Let's show them how much we care!

1. Please sign our petition and join us in our pledge to make the Maui Dolphin the National Symbol of New Zealand!

2. DO NOT BUY FISH OR SEAFOOD FROM NEW ZEALAND! If you buy fish from NZ you are supporting those who are fighting for the right to KILL the last 50 Maui's dolphins.

Be the Voice of the Maui Dolphin!

On behalf of the Maui's and Hecotor's dolphins

Today: Shining C. is counting on you