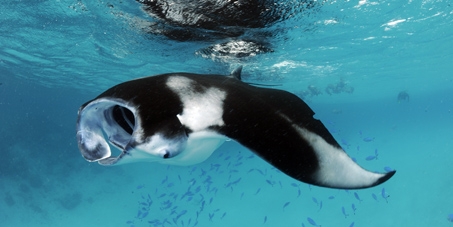 By continuing you agree to receive Avaaz emails. Our Privacy Policy will protect your data and explains how it can be used. You can unsubscribe at any time. If you are under 13 years of age in the USA or under 16 in the rest of the world, please get consent from a parent or guardian before proceeding.
This petition has been created by Moosa M. and may not represent the views of the Avaaz community.
x

The Maldives hosts the largest population of reef manta rays (Manta alfredi) in the world, but there is no national law which prohibits fishing or harming these increasingly vulnerable species. In many other countries the direct fishing of manta rays and their relatives, driven by the increased demand of gill plates in Eastern Asia, is decimating regional populations. Increased pressures from tourism are also having detrimental impacts on these species which national legislation can help to control.

Manta rays give birth to only one live born pup on average just once every 3-5 years and have one of the longest gestation periods of any animal. Their extremely conservative reproductive strategy, coupled with a slow growth rate and late maturity makes manta rays extremely vulnerable to exploitation. For these reasons many countries are acting quickly to safeguard their regional population of mantas. Indonesia, one of the world's leading manta tourism destinations like the Maldives, recently established the largest manta ray sanctuary in the world, protecting a 6 million sq. kilometre region!

Manta rays are an important resource in the Maldives, generating over US$8 million every year through manta ecotourism. The Maldives has already demonstrated its commitment to marine conservation by protecting all species of sharks and establishing several Marine Protected Areas throughout the archipelago. Now we ask the Maldives to launch a powerful message to the world and continue being a leader in marine conservation by declaring nationwide protection for manta rays and their relatives!

Thank you, every vote counts!