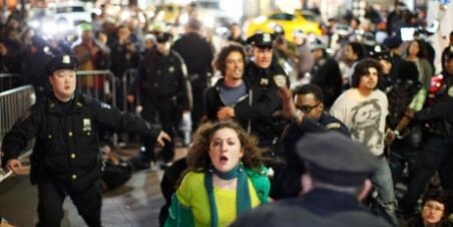 By continuing you agree to receive Avaaz emails. Our Privacy Policy will protect your data and explains how it can be used. You can unsubscribe at any time. If you are under 13 years of age in the USA or under 16 in the rest of the world, please get consent from a parent or guardian before proceeding.
This petition has been created by Yoni M. and may not represent the views of the Avaaz community.
x

"On March 17th 2012, at the 6-month anniversary celebration of Occupy Wall Street and St. Patrick’s day, Cecily McMillan was violently grabbed from behind by a police officer while she was complying with police orders by exiting the park. Startled as she was lifted off her feet by her right breast, Cecily threw up her arms in a natural reaction, accidentally elbowing the officer in the face. She was subsequently beaten into a seizure , waking up hours later completely covered in bruises. To add insult to injury, Cecily was charged with felony assault of a police officer . In addition to her physical injuries Cecily has suffered Post Traumatic Stress Disorder which has severely affected her ability to function as a student in graduate school. If found guilty, she faces up to 7 years in prison . These charges criminalize a perfectly normal reaction of an otherwise innocent woman.

The bottom line is, the officer had a bruise under his eye. Cecily had bruises all over her body. Justice demands that Cecily’s charges be dropped. This young woman has suffered enough physical and psychological harm as a result of the arrest and a prolonged two years awaiting trial.

Cecily is not alone. One of 73 people arrested that night at a peaceful celebration , what happened to Cecily is all too typical in an environment of police overreach and suppression. T he abusive and chilling effects of New York Police Departments on Occupy Wall Street are well documented as cited in a joint legal report by Harvard Law School and NYU School of Law.

Today: Yoni M. is counting on you