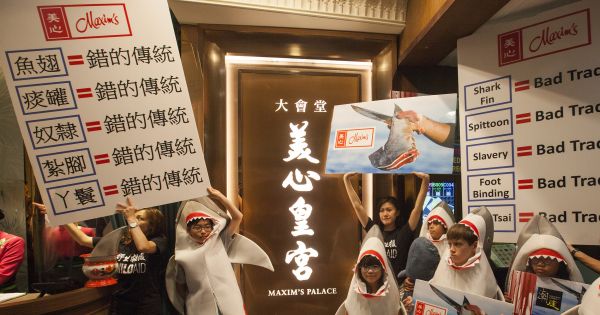 By continuing you agree to receive Avaaz emails. Our Privacy Policy will protect your data and explains how it can be used. You can unsubscribe at any time. If you are under 13 years of age in the USA or under 16 in the rest of the world, please get consent from a parent or guardian before proceeding.
This petition has been created by Alex H. and may not represent the views of the Avaaz community.
x

The company has been resisting calls to drop shark fin soup from their set menus, ignoring the will of many Hong Kong people who are against this cruel and unsustainable bad tradition.

Maxim's claim they only serve shark fin soup made from blue sharks, but according to recent scientific evidence, blue shark populations around the world are being wiped out by greedy overfishing.

Is Maxim's going to wait until blue sharks go extinct before it admits that there is a problem?

If you feel as strongly about this issue as we do, please kindly send the decision makers an email. Tell them what you think:‐