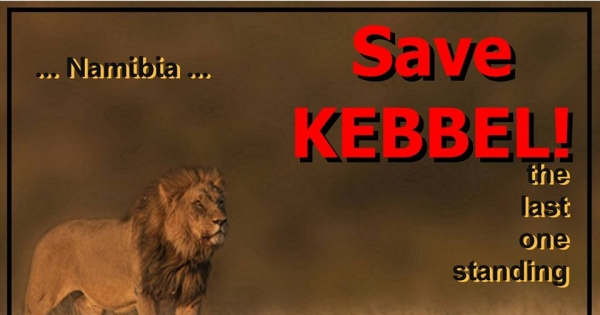 By continuing you agree to receive Avaaz emails. Our Privacy Policy will protect your data and explains how it can be used. You can unsubscribe at any time.
This petition has been created by Spots and Stripes C. and may not represent the views of the Avaaz community.

Sign this petition
Spots and Stripes C.
started this petition to
Minister Pohamba Penomwenyo Shifeta
We demand the Minister of Environment and Tourism to cancel and revoke the permit to sell any Lion classed as problem for trophy hunts.
COUNTDOWN TO MURDER. Stop Namibian Lion Trophy Hunt. 2 rare Desert Lions are up for auction to be trophy hunted and permits have been issued by The Minister of Environment and Tourism Namibia. on 15th February 2017 the Ministry denied publicly that Lions are up for a trophy.1 Lion Kebbel is being auctioned by Savannah Safaries and a second by Leopard Hunting Legends."Minister of Environment & Tourism Namibia February 15 · Clarification on the supposed lion and elephant hunt An online advert by Savannah Safaris has caused outrage specifically on social media with many criticising the Ministry for approving such a hunt. In this regard, we would like to clarify to the public that the hunt of both the lion and the elephant was not at all sanctioned or permitted by the Ministry. Even though Torra conservancy has under its annual quota for this year one lion for hunting, they still need to make an application to hunt that lion to the Ministry for consideration. It is disturbing to note that Savannah Safaris has advertised an elephant for trophy hunting, which is not in its annual qouta for 2017. It is unprofessional and unethical that the advertisement was made before the allocation of the annual quota was finalized, and without prior consultation from the Ministry. Therefore, the Ministry wished to assure the public that the matter will be addressed with Savannah Safaris in an effort to ensure compliance to the code and conduct expected from the professional hunters. The Ministry would further like to caution registered hunters to refrain from causing such unnecessary outrage through unauthorized and unethical undertakings which have potential to harm our reputable and sustainable hunting industry. Our hunting should be defined by professionalism and good conduct so that it continues to contribute significantly to the GDP of the country, poverty reduction and the betterment of livelihood of rural communities in the country, and to further the objectives of wildlife conservation. Furthermore, a general impression has been created that Namibia’s lions are depleting as a result of trophy hunting and human wildlife conflict. On the contrary, Namibia has a healthy lion population in several parks and an expanding lion population outside game parks, which has grown in north western Namibia from an estimated 25 animals in 1995 to around 150 to date. As a result more lion and human conflict has been experienced particularly in the Kunene region and as part of our lion population management strategy offtakes by means of trophy hunting are crucial. The Ministry of Environment and Tourism will conduct investigation into the matter and will provide feedback to the public on the matter. The Ministry once again encourages the public to consult our offices directly to raise their concerns instead of sensationalizing issues on social media such as Facebook."

These specially adapted 'desert lions' would be classified as 'extinct' if listed on the IUCN endangered animals list.The 'Vanishing Kings' Documentary by National Geographic followed five desert lion brothers, all of whom have been killed. We estimate that within the last 18 months, 7 cubs, and eleven lion and lionesses, from a total population of an estimated > 114 Lions remaining.Please join Spots and Stripes Conservation and DeLHRA (Namibia) in voicing your outrage at these decisions to carry out Trophy Hunts of these Lions.This petition will be delivered by hand on Tuesday, to the Namibian Embassy London. Thank you so very much for your support

Today: Spots and Stripes C. is counting on you