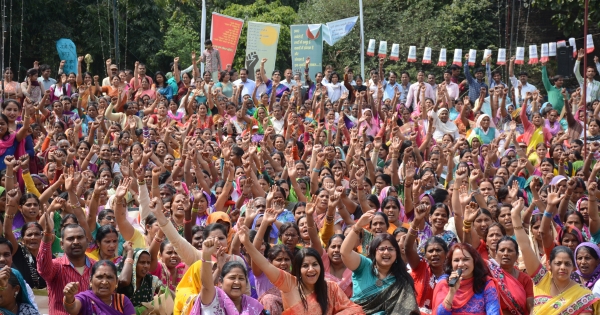 Minister of Human Resource Development, Government of India: Save the Mahila Samakhya programme!

By continuing you agree to receive Avaaz emails. Our Privacy Policy will protect your data and explains how it can be used. You can unsubscribe at any time. If you are under 13 years of age in the USA or under 16 in the rest of the world, please get consent from a parent or guardian before proceeding.
This petition has been created by KALYANI M. and may not represent the views of the Avaaz community.
x

Mahila Samakhya, launched in the late 1980s as a flagship initiative under the National Education Policy of 1984, works to mobilise rural women to define and chart the course of their own empowerment. The programme, which now covers 10 States, 44,446 villages and nearly 1.5 million rural women, is recognised by policy-makers for its success in expanding access to education for women and girls, and by movement activists for its commitment to supporting women to claim a range of rights.

All evaluations of the programme – including the most recent one carried out by IIM Ahmedabad in December 2014 – have validated the achievements of Mahila Samakhya and acknowledged that it has led to more fundamental, lasting and sustainable changes in women's lives than other more narrowly-targeted programmes.

The 2014 evaluation confirms that MS has enabled marginalised women to enter the public domain, acquire voice and agency and contribute to meeting national goals on education and development of women and girls. The report also highlights the success of the programme in reaching out to the most excluded social groups and in enabling women to challenge and oppose patriarchal practices and traditions such as child marriage, caste discrimination and the devadasi system.

There has been no public discussion on the future of the programme, and no reasons have been given for the decision to close it despite the positive evaluation.

Mahila Samakhya has been internationally recognised for its unique approach to women’s education and empowerment, its innovative strategies and its impressive ground level presence. Case studies on Mahila Samakhya have been regularly showcased as ‘best practices’ in publications by UNICEF, UNDP and UNESCO. Several independent scholars and institutions have drawn on the MS experience to expand the global discourse on women's empowerment. The Government of India has itself regularly highlighted the MS programme in its compliance reports on CEDAW and other international conventions.

Women's rights activists, researchers, academics and scholars have come together as "Friends of Mahila Samakhya" and written to the Minister of HRD against the government's move to close the Mahila Samakhya programme. The letter urges the government to retain the autonomy and unique character of this globally lauded programme.

The signatories to the letter include several individuals who have contributed significantly in building an inclusive policy framework and enabling public environment for gender equality in education, have spoken eloquently of how they have been enriched through their association with Mahila Samakhya.

Friends of Mahia Samakhya has urged the government to expand the scale and reach of the programme to cover all those districts with low indicators of women's development. The group emphasises the need to provide continued support to sangha members and programme functionaries who have given the best years of their lives to building the programme. “Closing MS would block these empowered women from influencing the course of development and achievement of sustainable development goals, and would be a huge loss to the nation” says their letter.