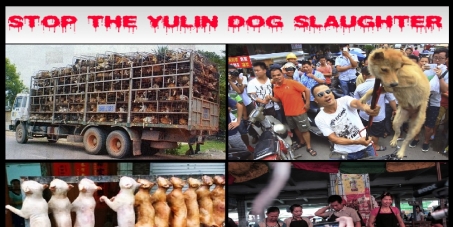 Sign this petition
Paul C.
started this petition to
Mr Liu Xiaoming, Chinese Ambassador To The United Kingdom
Every June, the southern Chinese city of Yulin celebrates the summer solstice with a dog-eating festival. Animal-rights activists estimate that around 10,000 dogs are killed every year for the festival, where they're consumed along with lychees and grain alcohol. Some dogs are strays while others are stolen pets, and breeds range from Dalmatians to Labradors to Tibetan Mastiffs.

This year, some festival-goers started early to avoid the protesters, who didn’t succeed in shutting down the 2014 festival but did drive up the price of meat.

Located in Yulin City, the “Big Market” is the largest trading centre for live dogs, some of which will end up on the dining table. The city government has not taken a stance on the dog-eating festival, instead simply stating that they have no connection to it.

As the festival approaches, dog-meat traders kill live dogs for customers in the slaughterhouse while others do so right on the street. The dog-eating is concentrated on this street in Yulin. From 6 p.m. until midnight, the streets are flooded with dog-meat eaters. Some traders offer one-stop service to customers, from slaughtering live dogs to processing the meat to selling it.

Activists attempt to stop dog traders from going to the market by negotiating with them. The activists purchase dogs to "save" them, but many traders use this as a business opportunity to sell dogs to them for above-market price.

Dogs are stolen, transported for large distances in crushed conditions, then tortured until they die.

This slaughter 'festival' is barbaric and must end NOW!