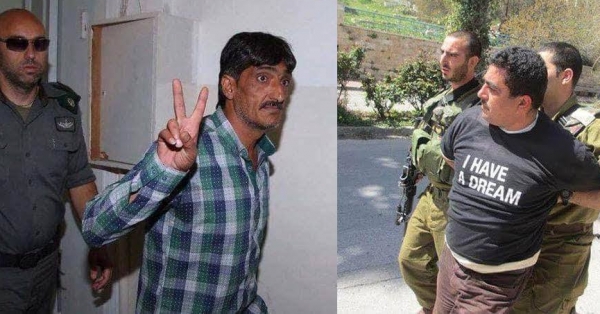 By continuing you agree to receive Avaaz emails. Our Privacy Policy will protect your data and explains how it can be used. You can unsubscribe at any time. If you are under 13 years of age in the USA or under 16 in the rest of the world, please get consent from a parent or guardian before proceeding.
This petition has been created by Katherine W. and may not represent the views of the Avaaz community.
x

Sign this petition
Katherine W.
started this petition to
Mr Zeid Ra'ad Al Hussein, United Nations High Commissioner
We, the undersigned, are concerned for the life and liberty of Imad Abu Shamsyeh and Badee Dwaik, members of the Human Rights Defenders group in the occupied Palestinian city of Hebron.

The Palestinian people have little defence beyond the cameras used to record the continuous abuse of human rights committed both by illegal setters who, under Israeli law, are entitled to carry high velocity rifles and Israeli soldiers.

To record these abuses, founders of the Human Rights Defenders group in Hebron, Mr. Imad Abu Shamsyeh and Mr Badee Dwaik, with the support of international activists, established a videotaping project called "the capturing of the occupation" as a non-violent form of resistance.

Over the last year violence in the Occupied Territories has
soared. Israeli soldiers broke into, searched and vandalised Badee Dwaik's house, assaulted his family and terrorised the children and women. They also broke the camera Badee uses to document their crimes and the assaults against neighbourhood residents.

Soldiers and settlers have shot dead many young people for throwing stones and also for alleged knife attacks. As Amnesty International relates Israeli forces have carried out a series of unlawful killings of Palestinians using intentional lethal force without justification. On 24 March 2016, Imad filmed an Israeli soldier shooting a
severely injured Palestinian youth who was unarmed
and laying on the ground.

Imad reports on that morning, he was drinking coffee with his wife when he heard gunshots outside he immediately grabbed his Human Rights Defender's camera and rushed out to see 21-year-old, Abdel al-Sharif crumpled on the ground surrounded by soldiers and settlers. When the ambulance arrived no attempt was made to help him.

The situation appears calm until one soldier shouts “stand back!” and shoots the young man in the head at close range. Despite his shock and horror, Imad managed to keep recording. As Abdel's blood runs down the road
surrounding soldiers and settlers appear to pay little
attention to what the Israeli human rights group B’Tselem, has since condemned as an extra-judicial street killing.

Since the shooting Imad Abu Shamsyeh and his family have been living in hell. He was arrested by the army and
the film was confiscated but thankfully not before awareness had been raised by its worldwide distribution to other human rights groups and media outlets. Since then Imad's family have undergone repeated threats and assaults including more than 20 threats on Facebook, including death threats and messages wishing that he will be burnt alive like the Dawabsheh family, a reference to three family members including 18-month old Ali Dawabsheh who were burnt to death in the West Bank village of Duma, near Nablus by terrorist settler youths.

We fear that the Human Rights Defender activists Imad Abu Shamsyeh and Badee Dwaik are living in constant danger of similar reprisals. In addition, they may face detention in order to stop them from documenting occupation crimes. We request that Imad Abu Shamsyeh and Badee Dwaik be
placed under the protection of the United Nations
and that you as high commissioner make it known that any harm to their life or liberty will be viewed as a serious
offence.

Today: Katherine W. is counting on you