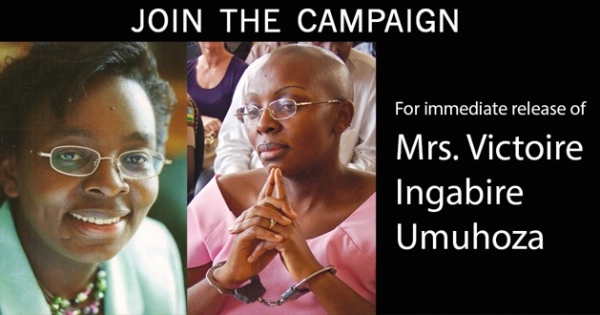 Mrs. Victoire Ingabire Umuhoza: We call on you to act for her immediate release from Kigali prison (Rwanda)

By continuing you agree to receive Avaaz emails. Our Privacy Policy will protect your data and explains how it can be used. You can unsubscribe at any time. If you are under 13 years of age in the USA or under 16 in the rest of the world, please get consent from a parent or guardian before proceeding.
This petition has been created by susan P. and may not represent the views of the Avaaz community.
x

Because she has been imprisoned injustly ! She is fighting for democracy and reconciliation for the people of Rwanda. She is the VOICE of the VOICELESS !!!!!!!!

RWANDA-Ingabire Victoire’s case before the African Court on Human and Peoples’ Rights: Headache for the Rwandan GovernmentMrs. Ingabire Umuhoza Victoire, Chair of UDF-INKINGI opposition political party in Rwanda, detained in Kigali central prison, is to appear before The African Court on Human and Peoples’ Rights in Arusha, on March 4th, 2016. In the meantime, the government of Rwanda, which is a party to trial, is subjecting her to various forms of inhumane and degrading treatment as if to break her morale and make it hard to prepare her case properly.Since Friday, February 5, 2016, the prison management has once again refused to allow her lawyer GATERA Gashabana to meet her in order to prepare her case.We would like to recall that since Friday, January 29, 2016, the prison management has reduced the number of people who can visit her from 5 to one person per week. This limitation applies to her only.On November 30th, 2015, her lawyer GATERA Gashabana, asked the President of the Kigali Bar Association to intervene and ask the Rwandan government to stop all the inhumane and degrading treatment of his client. Nothing has been done so far. In the opinion of lawyer Gatera, the molestation including the search of the lawyer and the reading of his legal notes constitute an unacceptable breach of international principles and rules protecting the legal profession.Further to the first refusal of lawyer Gashabana’s visit, the conditions of detention of political prisoner Ms. Victoire Ingabire has deteriorated, this includes, painting black the windows of her prison cell in order to stop any natural light filtering into the cell, a vicious measure that we fear could lead to blindness.While for medical reasons, her meal is brought in from outside the detention facility, the prison management has begun to systematically search the food brought by relatives of Mrs. Victoire Ingabire. Thus, in the process of checking the food under the pretext of looking for weapons or other prohibited items, a prison management official has systematically turns the food around in the container in a way that could make it look unpalatable to her, ostensibly to humiliate her and break her morale.The paroxysm of the persecution is now the downright refusal of any contact between Mrs. Victoire Ingabire Umuhoza and her lawyer. The UDF- Inkingi sends an SOS message to governments, friends of the people of Rwanda and human rights organizations to:

- Remind the inalienable and sacred right to a fair trial

- Remind the Government of Rwanda of its obligations regarding the treatment of prisoners;

- Remind the Government of Rwanda the absolute right of Mrs. Ingabire to meet and work with her defense team on her case

- Support the appeal of FDU-Inkingi to the Commission of the African Union to take into account the obstacles that the Rwandan government imposes the proper judicial process.