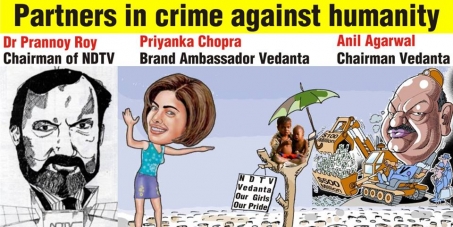 Sign this petition
Kamayani M.
started this petition to
Prannoy Roy, Founder, New Delhi Television Limited (NDTV)
August 19 was a day of Celebration when, Odisha has set precedents regarding community rights in terms of involving the local population in developmental activities. In a huge blow to Vedanta Resources Plc's in Odisha, all the gram sabhas have voted against its Rs 50,000-crore aluminium refinery project in the Niyamgiri hills of Odisha . They rejected the mining project saying it would affect their livelihoods and religious sentiments, The voting exercise was conducted as per the Supreme Court directions and the results will impact the Ministry of Environment and Forests final report. The result of the voting, which will have a bearing on the final report of the Ministry of Environment and Forest (MoEF) is likely to jeopardise the investment of Vedanta's alumina refining project in Kalahandi district. The project has drawn the anger of rights groups internationally and highlights the difficult task India faces in balancing economic development with the need to cushion hundreds of millions of poor from the fallout.

Niyamgiri hills, home to 8,000-odd Dongria Kondhs, a tribal group, a few hundred Kutia Kondhs and other forest-dwellers who eke out a living cultivating pulses, paddy and collecting naturally-grown horticultural crops, is considered sacred by the indigenous tribes and others as it is the abode of Niyamraja – their presiding deity.

After the unanimous resolution opposing mining was adopted, tribal people from neighbouring areas celebrated the ‘success’ of their decade-old agitation against mining in Niyamgiri by dancing with traditional musical instruments.

Braving heavy rain, 12 voters from Jarapa said they were ready to face bullets to stop digging of bauxite in Niyamgiri.

Today , August 19 is also a Black Day when NDTV launched its 'NDTV Vedanta Our Girls Our Pride', what uncanny timing,


This campaign for Vedanta is nothing but a PR exercise for image building, desperate attempt , after their loss today at niyamgiri hills, The matach is over- Niyamgiri Hills 12- and Vedanta - 0
“It is time now for Vedanta to gracefully respect public sentiment and pack off its establishment”
check- http://www.kractivist.org/match-over-niyamgiri-hills-12-vedanta-resources-0-tribalrights-win-goodnews/

Vedanta has always duped people, last year, Creating Happiness" - a series of short films about Vedanta that aired on 37 TV channels - was an advertising campaign conceived by India's ad guru Piyush Pandey of Ogilvy & Mather. It was launched earlier this year with a technically slick film that focused on the apparent happiness of Binno, a small girl in Rajasthan, when she discovers that she can get an education from the anganwadis (child day care centres) set up by the company.
Another campaign against it was launched as Faking Happiness- which exposed Vedanta and the Jury of the the film competition creating happiness,stepped down, after they came to know it was just a PR Excercise , jury included eminent film maker Shyam Benegal and actress Gul Panag. check here for details- http://www.kractivist.org/?s=Faking+Happiness%3A+Activists+Strike+Back+at+Vedanta+Ad+Campaign

Kamayani M. needs your help with " NDTV - Withdraw Vedanta as a Partner in 'Our Girls Our Pride' Campaign". Join Kamayani M. and 3,505 supporters today