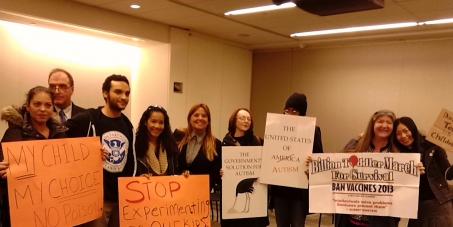 By continuing you agree to receive Avaaz emails. Our Privacy Policy will protect your data and explains how it can be used. You can unsubscribe at any time. If you are under 13 years of age in the USA or under 16 in the rest of the world, please get consent from a parent or guardian before proceeding.
This petition has been created by Sallie O. and may not represent the views of the Avaaz community.
x

Please VETO the mandatory flu and pneumonia shots for 6 months-5 year old children attending daycare, preschool or kindergarten. These children may not survive.

John's Hopkins SLAMS the flu shot, yet it is recommended annually for the youngest? This is truly dangerous. I cannot stress strongly enough that this is likely to have disastrous results and lives lost. The youngest are by far the most vulnerable. VETO the mandatory vaccines for the youngest.

Did you realize that one shot to a 6-lb infant is the equivalent of 30 shots to an adult of 180-lbs on the same day? No good can come of the ingredients in vaccines: MERCURY ANTI-FREEZE FORMALDEHYDE ALUMINUM AND M.S.G. Did you know that the basic CDC schedule calls for almost 50 shots for the 5 and under age group? PLUS additional mandates! This is a genuine threat to the well being and survival of the smallest. VETO- VETO- VETO these mandates!

The NYC Department of Health and Mental Hygiene has approved Mandatory Vaccines for Daycare, Preschool and Kindergarden Children (influenza, pneumonia and "All children shall have such additional immunizations as the Department may require."-page 8 of full resolution here: http://www.nyc.gov/html/nycrules/downloads/rules/P-DOHMH-09-19-13-c.pdf)

How was it that the size of a soft drink and e-cigarettes (both health concerns) were legislated, but not mandatory vaccination for the City's youngest? I questioned the authority of an unelected panel making this decision at the October 23rd hearing and did not receive a response.

At this hearing this issue arose: that NYC is the only City to have caps or limits on the amount of exemptions that can be attained. 1.2% are allowable, meaning the CDC schedule for NYC of 48 shots through the age of 5 are MANDATORY for 98.8% of all other children.

Here are articles and videos I would like you to look at regarding vaccines, all pertinent.

2) The vaccines mandated for NYC's children are written about by Christina England, Vaccine Journalist here: http://vactruth.com/2013/10/21/nyc-vaccine-mandate/

***Please take action to prevent this from occurring in NYC before it does, by January 10th.***

The following links and information were provided by Paul G. King, PhD, http://www.dr-king.com

4) “Urgent 100% Proof Pandemic is Man Made (child’s nasal spray will spread and cause the pandemic)” https://www.youtube.com/watch?feature=player_embedded&v=CyxZcUTRPNw

Cochrane Collab report:
Jefferson T, Rivetti A, Di Pietrantonj C, Demicheli V, Ferroni E. Vaccines for preventing influenza in healthy children (Review). The Cochrane Library 2012, Issue 8. This is a reprint of a Cochrane review, prepared and maintained by The Cochrane Collaboration and published in http://www.thecochranelibrary.com. Abstract athttp://onlinelibrary.wiley.com/doi/10.1002/14651858.CD004879.pub4/abstract; full article available athttp://www.update-software.com/pdf/CD004879.pdf.
[1] See “Main results” (emphasis added),
“We included 75 studies with about 300,000 observations. We included 17 RCTs, 19 cohort studies and 11 case-control studies in the analysis of vaccine efficacy and effectiveness. Evidence from RCTs shows that six children under the age of six need to be vaccinated with live attenuated vaccine to prevent one case of influenza (infection and symptoms). We could find no usable data for those aged two years or younger.
Inactivated vaccines in children aged two years or younger are not significantly more efficacious than placebo. Twenty-eight children over the age of six need to be vaccinated to prevent one case of influenza (infection and symptoms). Eight need to be vaccinated to prevent one case of influenza-like-illness (ILI). We could find no evidence of effect on secondary cases, lower respiratory tract disease, drug prescriptions, otitis media and its consequences and socioeconomic impact. We found weak single-study evidence of effect on school absenteeism by children and caring parents from work. Variability in study design and presentation of data was such that a meta-analysis of safety outcome data was not feasible. Extensive evidence of reporting bias of safety outcomes from trials of live attenuated influenza vaccines (LAIVs) impeded meaningful analysis. One specific brand of monovalent pandemic vaccine is associated with cataplexy and narcolepsy in children and there is sparse evidence of serious harms (such as febrile convulsions) in specific situations.”
[1] See “Authors’ conclusions” (emphasis added),
“Influenza vaccines are efficacious in preventing cases of influenza in children older than two years of age, but little evidence is available for children younger than two years of age. There was a difference between vaccine efficacy and effectiveness, partly due to differing datasets, settings and viral circulation patterns. No safety comparisons could be carried out, emphasising the need for standardization of methods and presentation of vaccine safety data in future studies. In specific cases, influenza vaccines were associated with serious harms such as narcolepsy and febrile convulsions. It was surprising to find only one study of inactivated vaccine in children under two years, given current recommendations to vaccinate healthy children from six months of age in the USA, Canada, parts of Europe and Australia. If immunisation in children is to be recommended as a public health policy, large-scale studies assessing important outcomes, and directly comparing vaccine types are urgently required. The degree of scrutiny needed to identify all global cases of potential harms is beyond the resources of this review.
This review includes trials funded by industry. An earlier systematic review of 274 influenza vaccine studies published up to 2007 found industry-funded studies were published in more prestigious journals and cited more than other studies independently from methodological quality and size. Studies funded from public sources were significantly less likely to report conclusions favourable to the vaccines. The review showed that reliable evidence on influenza vaccines is thin but there is evidence of widespread mani­pulation of conclusions and spurious notoriety of the studies. The content and conclusions of this review should be interpreted in the light of this finding.”
[1] See, “P L A I N L A N G U A G E S U M M A R Y” (emphasis added),
“Vaccines for preventing influenza in healthy children
Children (< 16 years old) and the elderly (above 65 years old) are the two age groups that appear to have the most complications following an influenza infection. Influenza has a viral origin and often results in an acute respiratory illness affecting the lower or upper parts of the respiratory tract, or both. Viruses are mainly of two subtypes (A or B) and spread periodically during the autumn-winter months. However, many other viruses can also cause respiratory tract illnesses.
Diffusion and severity of the disease could be very different during different epidemics. Efforts to contain epidemic diffusion rely mainly on widespread vaccination. Recent policy from several internationally-recognised institutions, recommend immunisation of healthy children between 6 and 23 months of age (together with their contacts) as a public health measure.
The review authors found that in children aged from two years, nasal spray vaccines made from weakened influenza viruses were better at preventing illness caused by the influenza virus than injected vaccines made from the killed virus. Neither type was particularly good at preventing ’flu-like illness’ caused by other types of viruses. In children under the age of two, the efficacy of inactivated vaccine was similar to placebo. It was not possible to analyse the safety of vaccines from the studies due to the lack of standardisation in the information given, but very little information was found on the safety of inactivated vaccines, the most commonly used vaccine in young children.”

Today: Sallie O. is counting on you