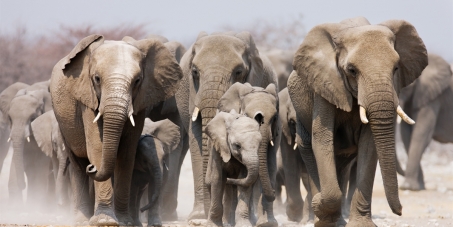 By continuing you agree to receive Avaaz emails. Our Privacy Policy will protect your data and explains how it can be used. You can unsubscribe at any time. If you are under 13 years of age in the USA or under 16 in the rest of the world, please get consent from a parent or guardian before proceeding.
This petition has been created by CJ C. and may not represent the views of the Avaaz community.
x

Sign this petition
CJ C.
started this petition to
Namibian Minister of Environment and Tourism: P. Shifeta
Namibia is home to one of only TWO groups of Desert Elephants in the World .
The Page dedicated to saving them is to be found under facebook.com/DesertElephantsAndFriends

An estimated number of fewer than 100 of these Desert Elephants are left in the Damaraland / Kaokoveld part of Kunene Region of the Namib, of which approximately 10 are Young Bulls.
The Tourism Value of these magnificent Desert Adapted Elephants should not be underestimated.

The Namibian Government has admitted, in 2014, to issuing 9 hunting permits for these Elephants ‐ the specific locations (in which Conservancies) have not been disclosed despite several requests. Since then, there has been a shutdown in communication, between concerned stakeholders and the Namibian MET, with the result that it is now impossible to say how many elephants remain.
The lack of photographic evidence of these 'vast herds numbering thousands' in the Desert Elephant areas, speaks for itself. They do not exist in anything remotely resembling those numbers. They are even ADVERTISED as some of the RAREST ANIMALS IN THE WORLD on the hunting sites&excl

With the killing of Delta, on 14 June 2014 in Sorris‐Sorris, concerns have been highlighted as to the extent of control that the MET has over the specific location as to which these hunts will take place.

UPDATE&colon
August 2017&colon Two problem Elephant Tags and one Trophy Hunting tag for Desert Elephants were issued by MET. No alternatives are taken into consideration wrt problem animals. They will just be shot.

Despite International Pressure, MET continues to regard these elephants as an infinite resource. It is a sad fact that numerous tourists have, as a result, made Botswana their destination of choice.

WE URGE YOU, HONOURABLE MINISTER AND THE NAMIBIAN MET, to strongly consider establishing the following&colon
1. Proclaim a Complete MORATORIUM on the hunting of any Desert ('Adapted') Elephants
2. Order an Immediate EXTREME FORENSIC AUDIT of the Desert Elephant Population and all the associated bull elephants
3. Immediate Declaration of the Desert Elephants as a NATIONAL TREASURE, enjoying SPECIAL PROTECTION under the President of Namibia.

These Elephants are one of the main tourist attractions for this lovely country.

Desert Elephants are beautiful, majestic, unique and very resourceful ‐ they absolutely deserve to be saved from man's greed&excl Picture credit ‐ Johan Swanepoel
The Desert Elephants Of Namibia Thank you for your Compassion and your Voice&excl

Today: CJ C. is counting on you