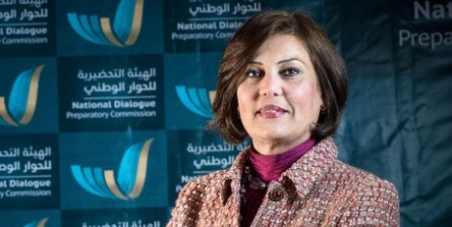 Justice for the murder of Salwa Bugaighis

By continuing you agree to receive Avaaz emails. Our Privacy Policy will protect your data and explains how it can be used. You can unsubscribe at any time. If you are under 13 years of age in the USA or under 16 in the rest of the world, please get consent from a parent or guardian before proceeding.
This petition has been created by WO=MEN D. and may not represent the views of the Avaaz community.
x

Sign this petition
WO=MEN D.
started this petition to
National parliaments, the EU and the UN
URGENT APPEAL - We demand justice for the murder of Salwa Bugaighis!

In shock and with great grief we have received the news of the murder of Libyan lawyer, politician and human rights activist Salwa Bugaighis, on June 25 2014. She was brutally killed by five unidentified men who entered her own home in Benghazi. (http://www.theguardian.com/world/2014/jun/26/salwa-bugaighis-libyan-shot-dead-benghazi)

There is no doubt that Salwa Bugaighis was killed because of her outspoken and visible activism for justice. She was a defender of freedom, inclusive democracy and human rights, in particular women’s rights. Salwa Bugaighis played an active part in Libya’s 2011 revolution, which overthrew the regime of Muammar Gaddafi. She was appointed a member of the National Transitional Council but soon resigned, because of the lack of progress in women’s rights.

Thereafter she was the vice-president of a preparatory committee for national dialogue in Libya. Salwa Bugaighis was one of the driving forces behind the political transition in the post-Gaddafi era and continued with passion and courage to fight for the role of women in this transition.

The murder of Salwa Bugaighis is a brutal crime that can be placed in a general trend to limit and silence the role of women and women’s rights organisations in Libya and the wider Middle East.

Today: WO=MEN D. is counting on you

WO=MEN D. needs your help with "Justice for the murder of Salwa Bugaighis". Join WO=MEN D. and 5,407 supporters today