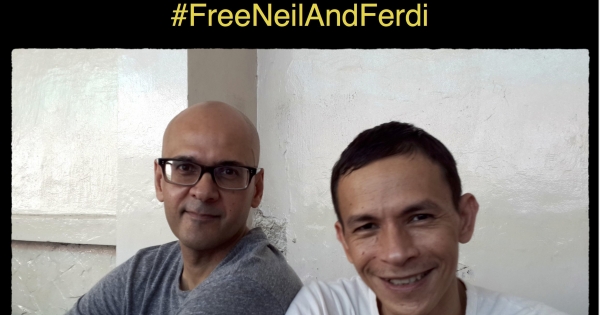 Neil Bantleman and Ferdinant Tjiong: Justice for these innocent men imprisoned in Indonesia!

By continuing you agree to receive Avaaz emails. Our Privacy Policy will protect your data and explains how it can be used. You can unsubscribe at any time. If you are under 13 years of age in the USA or under 16 in the rest of the world, please get consent from a parent or guardian before proceeding.
This petition has been created by Guy B. and may not represent the views of the Avaaz community.
x

Sign this petition
Guy B.
started this petition to
Neil Bantleman and Ferdinant Tjiong
Note: Petition description was updated June 10, 2015 to include recent facts about the case.

On April 3, 2014, the Jakarta International School (aka Jakarta Intercultural School or JIS) community was shocked by the news that a child was allegedly sexually assaulted at the school. At the time, five male and one female JIS cleaning personnel were accused as perpetrators.

The school was initially supportive of the mother of the alleged victim, although surprised when she sued the school for US$ 12.5 million dollars. When she increased her claim to US$ 125 million, the school was shocked. Regrettably, there are questions as to whether she is really interested in finding the truth, or perhaps just interested in money.

The parents of two more kindergarteners later made allegations against the school's staff and threatened more civil claims. Following their lead, the mother of the first alleged victim changed her claims to include JIS staff.

School administrator Neil Bantleman (a citizen of Canada) and teaching assistant Ferdinant (Ferdi) Tjiong (a citizen of Indonesia) were listed as perpetrators to even more alleged crimes of sexual abuse.

Neil and Ferdi are highly respected educators from the international school community. They have exemplary professional records and we reject the baseless allegations made against them.

On July 14, 2014, Neil and Ferdi were summoned to Jakarta Police Headquarters for questioning. They were joined by representatives from the U.S., Canadian and Australian Embassy’s, legal counsel, along with dozens of staff and families from the JIS community, as well as their spouses. Contrary to promises made by the Police, Neil and Ferdinant were subsequently detained by the Police to await trial.

In closed trials, where the media, the accused’s family members, and representatives from the Canadian and British embassies were denied access, all credible medical testimony produced by the defense was disregarded, in favor of testimony from the prosecution that included children being “delivered” during the regular school day to the molesters who had their way with them in what would have had to be full view of the rest of the school, then returned to their classrooms, exhibiting no negative effects from their ordeal. The testimony of classroom teachers who claimed no incidences of the children being removed from their classrooms, went the way of all credible medical testimony. Also admitted into evidence was children’s testimony, supported by both mothers’ and the presiding judges’ suggestive questions, of a magic stone produced from thin air by Mr. Bantleman, used to anesthetize the child from the waist down, so he would not object to the horrors he was about to experience. That magic stone disappeared in the same way it was produced.

On December 22, 2014, despite a lack of any objective and credible evidence that any crime occurred, five JIS cleaners were sentenced to seven and eight years, one cleaner, Azwar, died under suspect circumstances while police custody, and on April 2, 2015 Neil and Ferdi were sentenced to 10 years in prison. “Today is a miscarriage of justice," Neil said immediately after his verdict."We will continue to fight until the truth comes out."

U.S. Ambassador to Indonesia, Robert Blake, said in a subsequent statement. “We are deeply disappointed with this outcome...The outcome of the legal process and what it reveals about the rule of law in Indonesia will have a significant impact on Indonesia's reputation abroad."

Tracy Bantleman declared in a press conference soon after the verdict, that her husband and Ferdi Tjiong were victims of a "malicious make-believe story with a multi-million dollar price tag." All the accused are appealing their convictions.

We seek justice for Neil, Ferdi, the five JIS cleaners, Afrischa, Agun, Awan, Syahrial, and Zainal and demand that the Indonesian government rectify this clear violation of human rights.

Respectfully,
Friends of Neil and Ferdi and Supporters of Justice for the Innocent

Today: Guy B. is counting on you

Guy B. needs your help with "Neil Bantleman and Ferdinant Tjiong: Justice for these innocent men imprisoned in Indonesia!". Join Guy B. and 5,209 supporters today