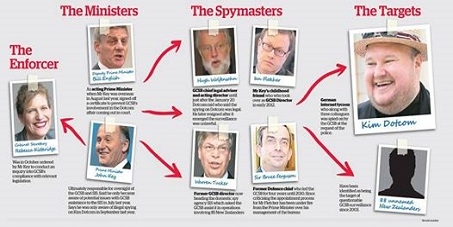 By continuing you agree to receive Avaaz emails. Our Privacy Policy will protect your data and explains how it can be used. You can unsubscribe at any time. If you are under 13 years of age in the USA or under 16 in the rest of the world, please get consent from a parent or guardian before proceeding.
This petition has been created by Gary F. and may not represent the views of the Avaaz community.
x

This GCSB bill allows the New Zealand Government to SPY on any one in New Zealand. "a vote here is a vote for freedom"

The Law Society has made a stinging attack on proposed law changes governing the GCSB spy agency, saying they effectively transform it from a foreign intelligence agency to a domestic one without any justification being given.

InternetNZ has also raised serious concerns about the bill before Parliament, saying its powers are too broad.

Submissions on the Government Communications Security Bureau and Related Legislation Bill closed on Friday, and hearings on it will begin early next month.

Lets Debate this New Zealand, At least have your say ?? Let the Prime Minister of New Zealand Know how New Zealanders Thinks and Feels about this issue..??

Do we need to spy on fellow New zealanders kiwi "S

GCSB Vote Against it ?? This Goverment has strong over tones of a big bully Government, there staff threatening a call to john key and your job gone, heaps of raids on suspected terrorist family homes in nz, ?? john keys old school buddies got the top gcsb job, imagine kim dotcom home being raided by all those men in black mask how scarey would that have been if it was your home., with hellicopters and guns, john key has a bad memory of allot of things, why does john key go red, whats the body language on that one.. Human Rights Commission says gcsb bill lacks sufficient checks against abuse of power, then told by P.M John Key pull your socks up and threaten there funding ??

Someone should lose there job ??? illegal means a law was broken.

What the National Government is doing about this is not to hold an independent inquiry to see what has been going on and ensure it doesn’t happen again. Just the opposite -- it’s reaction is to change the law so the GCSB can spy on New Zealanders legally.

John Key argues the bill is a clarification but that is simply not true. The bill grants the GCSB expanded powers and functions and transforms it from an agency focussed on foreign threats to one that also spies on New Zealanders.

The New Zealand Law Society, not generally considered a conspiracy theorist organisation, said the bill allows the GCSB; “under a cloak of co-operation with some other specified agency, to perform any activities that it chooses”.

The bill’s safeguards do not protect New Zealanders freedom of expression and freedom from invasive search.

There is no basis for giving GCSB unjustifiable powers to spy on New Zealanders at the expense of our freedom. We didn’t agree to this.

Today: Gary F. is counting on you