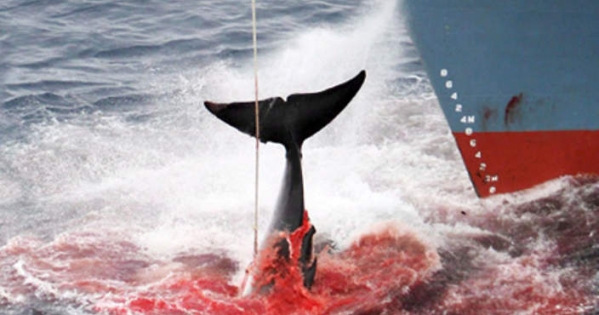 New Zealand and Australian governments: Arrest the Japanese whalers in the Southern Ocean and anywhere they sail.

By continuing you agree to receive Avaaz emails. Our Privacy Policy will protect your data and explains how it can be used. You can unsubscribe at any time.
This petition has been created by Robbie K. and may not represent the views of the Avaaz community.

Sign this petition
Robbie K.
started this petition to
New Zealand and Australian governments.
Stop all whaling in the southern hemisphere.


This petition is different to others launched in the past, because it asks for direct political action from the New Zealand and Australian governments. To create the required laws allowing for a combined ANZAC force to proactively enforce whaling bans created under that new law, and to create bans necessary to protect all endangered and or at risk marine species within our sphere of interest, the entire South Pacific and Southern Ocean.

To the governments of New Zealand and Australia.

Under the International Whaling Commission’s 1986 ban on commercial whaling, Japan was permitted to kill a certain number of whales every year for what it called scientific research.

In its 2010 application to the International Court of Justice, Australia accused Japan of failing to “observe in good faith the zero catch limit in relation to the killing of whales”. Japan could only cite two peer reviewed scientific studies, offered up as evidence in support of their so called scientific whaling program.

In 2014, the International Court of Justice ordered Japan to cease all whaling.

In a lengthy ruling, the presiding judge, Peter Tomka, said Japan had failed to prove that its pursuit of hundreds of mainly minke whales in Antarctic waters every winter, under a programme known as Jarpa II, was for scientific purposes.

Judge Tomka said “The evidence does not establish that the programme’s design and implementation are reasonable in relation to achieving its stated objectives,”

“The court concludes that the special permits granted by Japan for the killing, taking and treating of whales in connection with Jarpa II are not for purposes of scientific research,”

The court ordered Japan to cease its whaling programme with immediate effect.

Despite this court order, Japan warned they would resume whaling and that they would send ships of their coast guard, to protect their whaling ships, and may arrest protest vessels. Japan has no rights in international waters, to detain or arrest anyone, but made their position clear. They do not care about international law, are prepared to become international despots and criminals, and indeed, are prepared to do whatever is necessary to stop protesters, including using an armed paramilitary force.

We further encourage New Zealand and Australia, to scrap or sell any arrested whaling ship to offset costs, but those ships should not be offered back to Japan after payment of substantial fines or under any buy back program. These ships must never be used for the purpose of whaling again.

We further encourage that the Captains of Whaling ships be made aware, that with the taking of a single whale, they will be held personally liable for arrest and imprisonment. If our countries do not have the laws to allow such an arrest and charges to be made, we suggest New Zealand and Australia create those laws with urgency. Where the captains of whaling ships are made aware they can be arrested and charged with a crime, it may well serve to turn these ships around.

Japan chooses to mock international law. They have chosen to ignore the wishes of other states and our global citizens who are appalled by whaling for any purpose, anywhere on our globe. It is time Japan and other whaling nations, are stopped. We, concerned citizens of the world, ask for New Zealand and Australia to act proactively on our behalf, and stop this abhorrence in our Southern Ocean and throughout the South Pacific, should Japan decide to shift its operations to whale migratory routes. No whaling anywhere in the southern hemisphere.

To reiterate. On behalf of our global community, we beseech the Governments of Australian and New Zealand to act with urgency, using our combined naval forces to stop and arrest whaling ships of Japan, or any other nation, operating anywhere in the South Pacific or Southern Ocean. That if the laws do not exist to facilitate this action, then our governments should, with haste and in cooperation with our Pacific neighbours, create that law, in defence of endangered and or vulnerable whale species. We would also hope that Australia and New Zealand will also apply the same proactive enforcement regime to our combined fisheries and that of our Pacific neighbours, to protect all endangered or vulnerable marine species, forevermore.

Today: Robbie K. is counting on you

Robbie K. needs your help with "New Zealand and Australian governments: Arrest the Japanese whalers in the Southern Ocean and anywhere they sail.". Join Robbie K. and 11405 supporters today