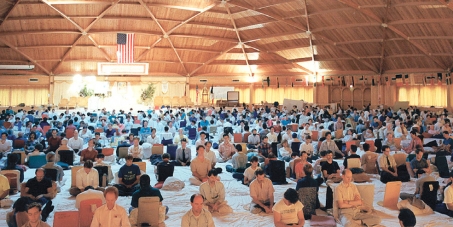 Bring hope to the Middle East!

As long-term practitioners of Transcendental Meditation (TM) you already know of the research that demonstrates how small groups of specialist meditators (known as TM-Sidhas) dramatically decrease violence and killing in war zones within days.

You have the power, influence and resources to sponsor a new meditation based peace project for Syria. Please help us send 2,000 of these specialist meditators to the Middle East. Within days of the group’s arrival, the fighting will stop, and prevent the civil war escalating further into a regional conflict."

Please sign our petition to persuade Nick Clegg (UK Deputy Prime Minister) and William Hague (UK Foreign Secretary) to sponsor this unique peace initiative. Together they can arrange for the UK government to back a powerful meditation based peace initiative in the Middle East.

Apparently both of these two senior politicians have been practicing the TM meditation technique for most of their adult lives. As such, they should already know about the extensive research into dramatically successful TM based peace projects. These two senior UK government leaders are in a unique position to play a key role in stopping the war in Syria and the escalating bloodshed in Iraq.

Previous research proves we can create peace with meditation

Fifty research studies show how groups of specialist meditators can have a positive impact on the wider community. Unbelievable as it may sound, the research reveals how a group of 2,000 specially trained meditators could stop the war in Syria in a matter of days. No physical, social or political interaction between the meditating group and the host population is required to produce this effect. These scientific experiments show that with group meditation, the peace process happens discreetly, spontaneously and in silence.

As unbelievable as this assertion may seem at first hearing, it is easier to understand in the light of recent theoretical discoveries.

Modern physics tells us why this initiative can work

Advances in physics are giving us a more unified understanding of the fundamental building blocks of life and the universe.

Essentially, modern physicists are exploring what are known as ‘Unified Field’ theories. These theories identify a single, universal, ‘unified field of intelligence’ as the ultimate basis of the material and phenomenal universe. What this means is that you, I and everyone else and everything around us are all an integral part of this unified field. This unified field is essentially self sufficient, as it creates everything from within itself.

The unified field is ultimately a field of consciousness

Significantly, this theoretical exploration also shows that an important property of the unified field is that, it is fundamentally also a field of consciousness.

All life, including us as human beings, is an integral part of this field of consciousness, just as individual drops of water merge to form an ocean.

But the exciting news goes beyond just theoretical physics.

Extensive published research demonstrates that in the most settled state of human awareness, where our individual consciousness transcends intellectual thought and emotion, we are actually experiencing the unified field directly on the feeling level.

It seems our nervous systems are designed to experience the transcendent as a normal part of human existence. But generally speaking most of us seem to have forgotten how.

How to experience the unified field

The easiest and quickest way to reach this sublime state of expanded awareness is through a meditation technique known as Transcendental Meditation (TM). We now know this from both inference and scientific measurement.

Researchers observe that this state of expanded awareness is actually identifiable in physiological terms. When TM practitioners meditate, then at the precise moments of transcending thoughts and emotions, a whole range of physiological factors change including the spontaneous onset of highly coherent brain wave functioning.

Amazingly, the coherent brainwaves experienced during Transcendental Meditation do not just reduce stress and create calm, tranquility and more integrated thinking for the meditators themselves. Coherent brain waves actually create a powerful broadcast effect on the wider non-meditating population as well.

Coherent brainwave functioning literally resonates across the unified field and reduces stress in everyone else in the vicinity of the meditator. The more meditators there are, the wider the effect.

It gets even better.

Advanced practitioners of Transcendental Meditation known as TM-Sidhas can greatly enhance this stress reducing effect in society. They can do this by simply applying their attention in the subtlest way to life supporting values during their meditation sessions. This stress reducing effect of a group of TM-Sidhas on the wider society is very systematic. In fact the effect is so consistent, specific and measurable that we can now predict exactly how many of these specialist meditators are required to trigger a rapid step change, from hostility and aggression, to positivity and harmony within any given populace.

Although this concept may seem counter intuitive, it is backed up by fifty field studies that prove beyond all reasonable doubt that the idea works. Collectively, these studies clearly and unequivocally show that all that is required to create a positive shift in consciousness in the whole Middle East is a group of 2,000 TM-Sidhas based somewhere in the region.

Experience, from trouble spots like the Lebanese civil war in the eighties, the Croatian and Mozambique civil wars and the Rhodesian (now Zimbabwe) war of independence indicates that such a lift in consciousness would spontaneously stop the fighting and killing, dampen down the fury and get people talking. Crucially this shift in consciousness would allow space for the negotiation of sustainable political structures agreeable to all sides and so enable people to live together in peace.

Nick Clegg, and William Hague are two leading UK politicians and so have the power and influence to make a real difference. But they will not take this novel and powerful approach unless they feel public support is behind them. Please join our petition to persuade the UK government to sponsor a meditation-based peace group while there is still a chance to avert further tragedy.

With 10,000 signatures let us persuade Nick Clegg and William Hague to take action. With your support we can save tens of thousands of lives and stop the Syrian civil war further escalating conflict in the region. Success with this project would introduce the world community to a new means to create peace wherever violence, conflict and aggression arises.

With best wishes from the World Peace Group team. http://www.worldpeacegroup.org

Research report on how 100 people saved their village from destruction by practicing Transcendental Meditation http://www.worldpeacegroup.org/baskinta_peace_project.html

Research published in the "Journal of Conflict Resolution" about a group of specialist meditators who reduced war fatalities in Lebanon during the civil war
http://www.worldpeacegroup.org/lebanon_peace_project_research.html

“I think the claim can be plausibly made that the potential impact of this research exceeds that of any other ongoing social or psychological research program. It has survived a broader array of statistical tests than most research in the field of conflict resolution. This work and the theory that informs it deserve the most serious consideration by academics and policy makers alike. David Edwards Ph.D., Professor of Government, University of Texas at Austin

Today: Jeremy O. is counting on you