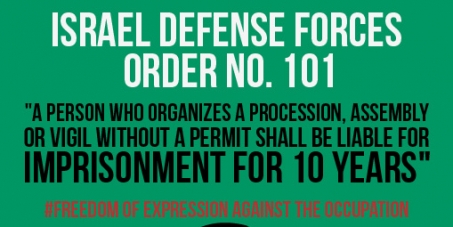 By continuing you agree to receive Avaaz emails. Our Privacy Policy will protect your data and explains how it can be used. You can unsubscribe at any time. If you are under 13 years of age in the USA or under 16 in the rest of the world, please get consent from a parent or guardian before proceeding.
This petition has been created by Popular S. and may not represent the views of the Avaaz community.
x

Sign this petition
Popular S.
started this petition to
Nitzan Alon, IDF commander in the West Bank
Abdallah Abu Rahme (44) is due to be sentenced on February 23rd for exercising his legitimate right to protest in a nonviolent manner against the human rights violations and abuses perpetrated by the State of Israel on the occupied Palestinian territories.
Abdallah´s sentencing was expected to be read last February 8th, but was postponed until tomorrow.
On February 8th, several INGOs, political representatives and human rights activists were present at the Military Court of Ofer, (next to Ramallah) to show their support to Abu Rahma and to send a message to the Israeli Authorities: the world is watching and it won´t keep silence much longer in front of all these human rights violations and atrocities. Enough is enough.
The military prosecution argued on the last hearing that Abdallah should be sentenced to a prison term of "many months" as well as a deterring suspended sentence and a very severe fine. The prosecution's stance was based on Abdallah's previous convictions for exercising his legitimate right to protest, as well as the argument that the court should "convey an unequivocal message according to which demonstrators have an absolute duty to obey orders given by the security forces, and whoever disobeys them should expect to be imprisoned." The prosecution has also stated that Abdallah is motivated by non-compromising ideology which casts doubt on the possibility that he will abandon his ways and will rehabilitate."
Freedom of expression and peaceful assembly are fundamental rights and never can be treated as behaviours that need any kind of "rehabilitation". This approach flagrantly violates fundamental rights and freedoms of the Palestinian people, recognised in several international agreements such as the Pact on Civil and Political Rights, the Universal Declaration of Human Rights or the UN Declaration on Human Rights Defenders.
Because of this we appeal to the obligation of every person and country to protect and promote human rights, the undersigned persons hereby request the acquittal of Abdallah Abu Rahme on all charges and urges the Israeli Government to fulfil his obligations, respecting International Humanitarian Law and International Human Rights Law, ensuring protection of Human Rights and its defenders.
REMEMBER: SILENCE IS COMPLICITY

Today: Popular S. is counting on you

Popular S. needs your help with "We refuse to die in silence: Freedom of expression against the Israeli occupation". Join Popular S. and 3,895 supporters today