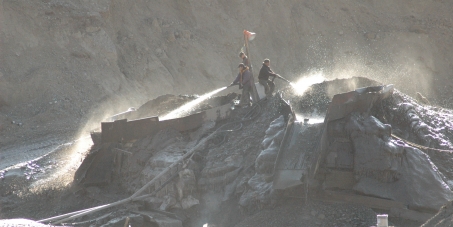 Parliament of Mongolia - protect the Law. Do not open rivers and forests to mining!!

By continuing you agree to receive Avaaz emails. Our Privacy Policy will protect your data and explains how it can be used. You can unsubscribe at any time. If you are under 13 years of age in the USA or under 16 in the rest of the world, please get consent from a parent or guardian before proceeding.
This petition has been created by Tserenkhand H. and may not represent the views of the Avaaz community.
x

Mongolia is a small country with pristine environment and nomadic traditions, which now faces rapid industrialization fueled by foreign investment in mineral extraction. The Law “To prohibit mineral exploration and mining operations at headwaters of rivers, water protection zones and forested areas” , known in the society as the “Law with Long Name” was drafted and promoted by representatives of local communities severely affected by gold mining. The Law adopted in 2009 protects 25% of Mongolian natural ecosystems from destruction by mining, which are essential safeguards as the country undergoes mining boom.

In summer 2013 the Government of Mongolia seduced by corrupted officials has proposed to cancel the implementation of this law in exchange for a promise from mining corporations to increase production of gold mined in riverbeds.

The Mongolian Parliament now has to decide whether to change the Implementation Guidance for this Law, and by doing so cancel protection of rivers and forest from irresponsible mining. This could immediately result in opening of more than 1300 sites to mining and prospecting operations and in drastic reduction in legally protected natural areas. Mongolian people want no change to this Law, but effective protection measures to be in place, before all our rivers are destroyed by mining.

This summer our environmental movement submitted many requests to top officials to discuss proposed changes , but there was no reply from President, Parliament and Government. In the morning of 16 Sep 2013 before the Special session of Parliament, that gathered to change the Law, I brought our petition to the Parliament House. To demonstrate that we are ready to protect our motherland from encroachment I carried a gun, but it was not loaded. No one got inquired and no property was damaged during that demonstration. Since then I and my friends are arrested and authorities want us to be sentenced for “threatening public stability” to serve many years in jail. Whatever is said by government-sponsored media, our real goal is proper implementation of the Law, that protects our rivers and forests from rampant mining. And the Law with Long Name still stays unchanged until today, but next few weeks are crucial to convince the Mongolian Parliament not to weaken the law and take measures to implement it properly.

Please, sign this petition to help Mongolian people to defend their land and to implement the Law that protects rivers and forests from destruction by mining.

the founder of the United Movements for Mongolian Rivers and Lakes (UMMRL), 2007Goldman Environmental Prize winner.
Report this as inappropriate
There was an error when submitting your files and/or report.
Inaccurate Inappropriate language Hate speech Illegal Commercial/spam Offensive
×

Today: Tserenkhand H. is counting on you

Tserenkhand H. needs your help with "Parliament of Mongolia - protect the Law. Do not open rivers and forests to mining!!". Join Tserenkhand H. and 722 supporters today