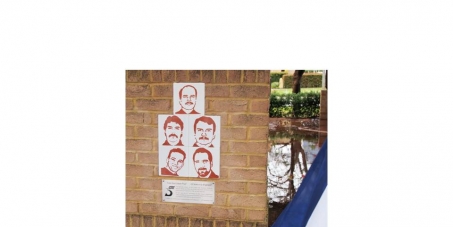 By continuing you agree to receive Avaaz emails. Our Privacy Policy will protect your data and explains how it can be used. You can unsubscribe at any time. If you are under 13 years of age in the USA or under 16 in the rest of the world, please get consent from a parent or guardian before proceeding.
This petition has been created by Elizabeth H. and may not represent the views of the Avaaz community.
x

Freedom for Five Cuban anti-terrorists unjustly imprisoned in the US.

The objective of the Five was to protect innocent lives in Cuba. The Cuban Five collected evidence of terrorists’ plots from Cuban American groups in Miami, which was then presented to the FBI. On June 17, 1998, a historic meeting was held in Havana. There, Cuban officials implored U.S. law enforcement officials to act on evidence presented, in order to end the cycle of terror. Instead of arresting the terrorists, the FBI rounded up the Cuban Five.

Fernando González, René González, Antonio Guerrero, Gerardo Hernández, and Ramón Labañino were arrested on September 12, 1998, and placed in solitary conﬁnement for 17 months. They were charged with failure to disclose themselves as foreign agents, to several counts of conspiracy. The Cuban Five were denied the right to an unbiased jury trial. The jury was intimidated, witnesses were bullied by the prosecution, and defense lawyers were denied access to some evidence. The Cuban Five were unjustly sentenced to four life terms and 75 years collectively.
Report this as inappropriate
There was an error when submitting your files and/or report.
Inaccurate Inappropriate language Hate speech Illegal Commercial/spam Offensive