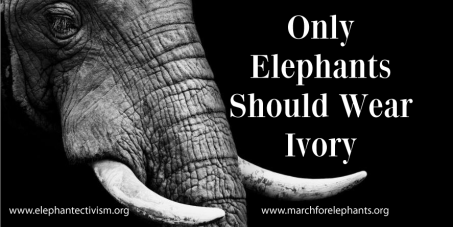 Only Elephants Should Wear Ivory!

By continuing you agree to receive Avaaz emails. Our Privacy Policy will protect your data and explains how it can be used. You can unsubscribe at any time. If you are under 13 years of age in the USA or under 16 in the rest of the world, please get consent from a parent or guardian before proceeding.
This petition has been created by Rosemary A. and may not represent the views of the Avaaz community.
x

Sign this petition
Rosemary A.
started this petition to
Mr. John Scanlon, Secretary General of The United Nations Convention in Trade of Endangered Species (CITES) and the *Member Parties to the Convention. And: The Ministers for Environment of South Africa, Kenya, Tanzania, Botswana, Namibia, Zambia, Angola,
Only Elephants Should Wear Ivory!

STOP the demand. STOP the trade. STOP THE KILLING NOW before it is too late!

YOU can make this a reality by signing. Please sign!

As citizens of the world, we urgently request the Member Parties of the United Nations Convention on International Trade of Endangered Species (CITES) and the Ministers of Environment of the African Range States to take strong, affirmative and sustained action to help save the elephant from the very real threat of extinction.

The current losses of Elephants as reported in the UNEP “Elephants in the Dust” report (2013) clearly indicates the current poaching crisis and subsequent ivory trading is driving the extirpation and eventual extinction of elephants across the African continent. Wholesale slaughter of wild elephants, throughout much of Africa, to meet predominantly Asian demand, has decimated the herds and seen a drastic drop in numbers which is a cause of major concern worldwide.

We, the undersigned, call on CITES and its member parties and our political leaders to ensure the following immediately:

• A global ban on all aspects of ivory trading, including destruction of stockpiles of ivory worldwide.
• Increased protection of the elephants’ habitat from destruction and exploitation.
• Stringent laws implemented and strict judicial sentences to be imposed on poachers and all those involved in the trade.

There is no valid defense for any trade in ivory, given the devastating impact on elephant populations, as a result of the incessant demand. In addition, multiple reports by non-government organizations state that any continued sale of ivory through the CITES mechanism is driving the continued trade and resulting in the escalation of slaughter.

We call for immediate action to protect these iconic creatures now and for posterity.

Only elephants should wear ivory.

STOP the demand. STOP the trade. STOP THE KILLING NOW before it is too late!

YOU can make this a reality by signing. Please sign!

Today: Rosemary A. is counting on you

Rosemary A. needs your help with "Only Elephants Should Wear Ivory! ". Join Rosemary A. and 9,411 supporters today