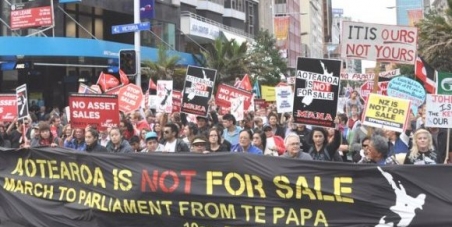 Stop the sell out - Aoteroa is still Not For Sale!

3 September 2012:
John Key has just announced that he is going to delay asset sales until next year, while the issue of Maori water ownership is sorted out. A win for people power!
For the video, see http://www.3news.co.nz/Asset-sales-delay---extended-footage/tabid/1607/articleID/267877/Default.aspx?

John Key is ramming controversial asset sale legislation through parliament -- against the advice of economists. But we can  create a massive public outcry to stop the sale of our key services , and tell John Key that our country is not for sale.

The partial privatisation of Mighty River Power, Genesis, Meridian, and Solid Energy would be  a bad deal for New Zealand . Over 75 per cent of people polled oppose the plan, and thousands of people have protested, so  John Key is now trying to rush this legislation through parliament . But a huge wave of public opposition now can stymie this plan and stop MPs from passing the bill.

We only have days left to tell our politicians to stop the sell out. Sign the petition now  and share it as widely as you can!

Today: Peter G. is counting on you

Peter G. needs your help with "Stop the sell out - Aoteroa is still Not For Sale!". Join Peter G. and 23,426 supporters today