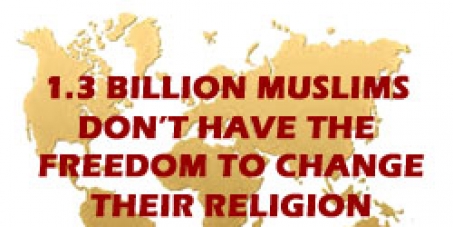 By continuing you agree to receive Avaaz emails. Our Privacy Policy will protect your data and explains how it can be used. You can unsubscribe at any time.
This petition has been created by Kamal F. and may not represent the views of the Avaaz community.

Sign this petition
Kamal F.
started this petition to
Organization of Islamic Cooperation member states.
Article 18 in the Universal Declaration of Human Rights declares that "Everyone has the right to freedom of thought, conscience and religion; this right includes freedom to change his religion or belief, and freedom, either alone or in community with others and in public or private, to manifest his religion or belief in teaching, practice, worship and observance". But unfortunately 1.3 billion Muslims are stripped of their freedom and right to chose their belief. Muslims who want to leave Islam are forced to remain Muslims against their will and do not have the right to exist as non Muslims. OIC need to implement Article 18 in the UDHR in their member states and stop violating the right of individual for freedom of thought, conscience and religion.
Report this as inappropriate
There was an error when submitting your files and/or report.
Inaccurate Inappropriate language Hate speech Illegal Commercial/spam Offensive