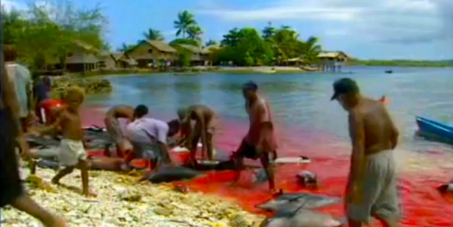 "Operation Trident" to end the Dolphin Slaughter in the Solomon Islands

By continuing you agree to receive Avaaz emails. Our Privacy Policy will protect your data and explains how it can be used. You can unsubscribe at any time.
This petition has been created by Global Wildlife W. and may not represent the views of the Avaaz community.

The largest Dolphin slaughter in the world occurs not in Japanese Taiji or the Danish Faroes but in the Solomon Islands. According to statistics, Dolphins numbering in the “tens of thousands” have been hunted and killed for hundreds of years. Since 2003 this carnage and suffering has been exacerbated by the sale of live Dolphins to profiteers who sell them to aquariums, hotels, and amusement centers on the global market.

The long-term effects of wild captures are significant as the associated mortality also affects the dynamics and cohesion of the Dolphin societies left behind. According to the Whale and Dolphin Conservation Society, “some populations of marine mammals have not rebounded from captures for public display that occurred as far back as the 1960s.”

It is important to note that although the practice of live Dolphin capture still exists in the Solomon Islands, many countries have banned live captures and/or imports of wild caught animals based on humane and sustainability grounds. Some of these countries include Costa Rica, Mexico, Chile, New Zealand, Brazil, Argentina, Peru. Cyprus, Thailand, Chile, Dominican Republic, Nicaragua, Australia, China, Switzerland, and Croatia.

In a speech at the 'End Wildlife Crime Conference' at St. James’Palace, His Royal Highness Prince William, Duke of Cambridge, began his address by saying that "My plea to you today comes not from a place of expertise, but a place of deep respect for the world that we have inherited.”............“ We all know how devastating the illegal wildlife trade is on populations of endangered species - we have all heard the statistics. My fear is that one of two things will stop the illegal trade: either we take action to stem the trade or we will run out of the animals. There is no other outcome possible."

The villagers in the Solomon Islands have relied for centuries on the slaughter of Dolphins for subsistence but their reasons today are very different. They have fallen under the influence of foreign and domestic traders who are capitalizing on their culture.

Village leaders have said that they are willing to put an end to the slaughter if they can find a different and reliable means to sustain themselves and their families. Two of the local chiefs have agreed that if they could find a subsidy of $2,500 annually, they could stop hunting the Dolphins as this amount would be enough to feed members of both tribes for a year. This is only a quick fix but bringing a halt to the capture and slaughter of the Solomon Dolphins now would later bring incalculable social and economic benefits to these rural communities via our Global Wildlife Warriors Eco tourism proposal!

The present monarch of the Solomon Islands is her Royal Majesty Queen Elizabeth II. We contend that an Intervention by the Royals could and would indeed save what is left of the Dolphin population and put an end to the corruption and illegal trade that is presently taking place in these beautiful islands.

This Global Wildlife Warriors’ project goal is to work with the villagers in the Solomon Islands to help them build an Eco tourism industry where people can view the Dolphins in their natural environment and appreciate them for their magnificence, intelligence - and similar to human families - their strong family bonds.

This venture will not be possible without the help of donations from people who want see the Dolphins live happy and safe lives.

We ask you to help by doing four things :

1. View a video of the hunt and slaughter.

2. Visit the following link by copy / paste into your browsers address bar.This is our long term plan for the Solomon Dolphins

3. Please sign our Petition asking the Royal Family to intervene on behalf of the Dolphins and villagers of the Solomon Islands.

4. Please share this address everywhere to help the villagers have a productive and viable future and to save the Dolphins from further abuse, slaughter, and exploitation.

For more information please join us at:

Coming Soon To A Neighborhood Near You

Today: Global Wildlife W. is counting on you