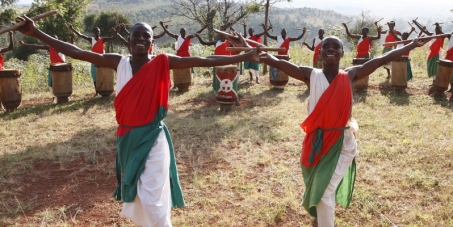 PETITION TO THE GOVERNMENT OF BURUNDI VIA EMBASSY OF BURUNDI IN KENYA: Respect the Constitution of Burundi & the Arusha Accord

By continuing you agree to receive Avaaz emails. Our Privacy Policy will protect your data and explains how it can be used. You can unsubscribe at any time. If you are under 13 years of age in the USA or under 16 in the rest of the world, please get consent from a parent or guardian before proceeding.
This petition has been created by Edwin K. and may not represent the views of the Avaaz community.
x

We, the Burundian Diaspora in Kenya, together
with the Friends of Burundi in Kenya, wish to indicate that, despite the
deafening regional and international silence to protests and escalating violence
sweeping Burundi, it is in the best interest of Burundi and its people that we
formally lodge this petition concerning the current political situation which,
if not responsibly addressed, could adversely affect the still fragile peace
and plunge Burundi back into civil war.

We humbly
draw the government’s attention to the following:
1.      The Constitution of Burundi which reposes all sovereign power in the
People of Burundi.
2.      The Arusha Peace Accord and its guiding principles.
3.      The People’s faith in ideal peace, reconciliation and national unity,
and their determination to protect and defend the fundamental human rights and
social justice.
4.      That article 6 of the Constitution gives the legitimizing function to
the people by stipulating that the principle of the Republic of Burundi is the government
of the people, by the people and for the people.


5.
That under
article 7 of the Constitution the People of Burundi are the sole custodian of
national sovereignty which they can exercise directly or indirectly through
their representatives and that no fraction of the people and no individual can
arrogate its exercise.
6.      That article 15 of the constitution clearly indicates that the government,
whose legitimacy and authority are dictated by the people, is intrinsically
responsible and answerable to the people and must respect their liberties and
fundamental rights.
7.      That articles 31 and 32 of the constitution guarantee the freedom of
expression, association, assembly and instructs the state to respect freedoms
of opinion and thought among others.
8.      That under article 47 of the Constitution of Burundi any restriction
of a fundamental right must be founded on a clear legal basis, and must be
justified by the general interest or by the protection of a fundamental
interest of others and appropriate to a specified goal which is, to our best
knowledge, not the case in relation with the prevailing political situation in
Burundi.
9.      That article 73 of the Constitution of Burundi explicitly states that
every individual-and that includes the president, the police and the general
public- has the duty to contribute to the safeguarding of peace, democracy and
social justice.
10.   That under article 95 of the Constitution of Burundi, the President
of the Republic, Head of State, incarnates national unity and sees to the
respect for the constitution and assures by his arbitration the continuity of
the State and the regular functioning of the institutions.
11.   That reading article 106 of the constitution, dealing with the oath
that the president solemnly takes when assuming his function, one would be
tempted to believe that the president is, if not already, blatantly betraying
his oath of office and could likely be accused of High Treason, by deliberately
committing acts contrary to the superior interests of the nation and gravely
compromising national unity and infringing human rights, among others, in
violation of the Constitution.
12.   That the current political situation is in violation of both the
Supreme Law of the Country and the Arusha Peace Accord.

THEREFORE your humble petitioners DEMAND that the Government
of Burundi:


13.
Makes
efforts to Stop Violence against citizens immediately and facilitate Humanitarian
Support.
14.
Protects
people’s peaceful expression and defense of their democratic rights and freedoms
as enshrined in the Constitution.
15.
Reminds
the President to respect and uphold the Oath of Office he solemnly took before
the People of Burundi and the larger international community.
16.
Ensures
that security forces, especially the police, provide security to all in a
neutral manner.
17.
Restores
appropriate and innovative state-civil society relations.
18.
Respects the right of the media, both state
and non-state, to report freely in an environment devoid of intimidation,
threats and violence.
19.
Refrains
from subverting the Constitution and the Arusha Peace Accord on which the
people of Burundi have placed their hopes and aspirations.
20.
Releases
ALL those arrested while
demonstrating in different parts of Burundi.
21.
Refrains
from upholding President Peter Nkurunziza’s nomination as CNDD’s candidate for
the June presidential election as it goes against the will of the people of Burundi
and is an affront to the Arusha Peace Accord.


22.
Obeys,
upholds, protects, preserves and defends the spirit and letter of the Constitution
of Burundi and the Arusha Peace Accord especially in relation to a likely third
presidential term.
23.
Investigates
ALL cases of injuries and loss of life during the ongoing protests and ensures
that all  perpetrators are held
accountable