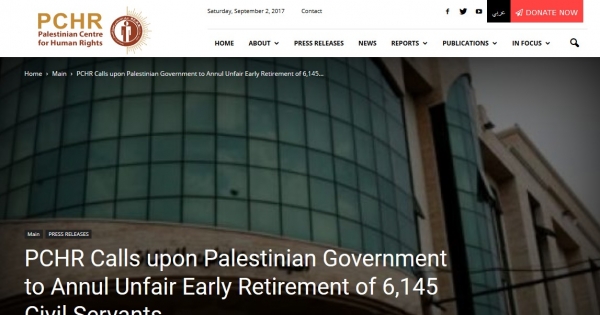 By continuing you agree to receive Avaaz emails. Our Privacy Policy will protect your data and explains how it can be used. You can unsubscribe at any time. If you are under 13 years of age in the USA or under 16 in the rest of the world, please get consent from a parent or guardian before proceeding.
This petition has been created by anna M. and may not represent the views of the Avaaz community.
x

We write on behalf of 831 academic and administrative staff of Palestinian universities, university colleges and institutes in the Gaza Strip, Occupied Palestine.

In April 2017, the Palestinian Authority, based in Ramallah, Occupied West Bank, unilaterally slashed the salaries of the 831 staff mentioned above, instituting sudden, unexpected and unjustified wage cuts of up to 85&percnt, leaving the academic and administrative staff with just 15&percnt of their salaries every month thereafter.

Despite this wage cut, which left the majority of the staff without enough money to survive, the committed staff continued to teach and perform their duties as before.

In August 2017, following these drastic pay cuts, Palestinian president Mahmoud Abbas announced that the entire staff complement of all 831 tertiary education personnel would be placed, along with other civil servants, without any consultation whatsoever, on early retirement.[i] This is a grave violation of Palestinian Basic Law, Civil Service Law and International Labour Law. Moreover, they are a breach of international treaties, such as the International Covenant on Economic, Social and Cultural Rights (ICESCR) to which the PA is a signatory.

None of the staff, whether academic or administrative, were given any valid reason for this unjustified action which is purely punitive. The forced retirements were reported by the Palestinian media as having been motivated by a factional hatred on the part of the ruling party in the Palestinian Authority (Fatah) for Hamas&colon PA spokesman Yousif al‐Mahmoud stated in July 2017 that the decision ‐‐ as well as "previous procedures and any possible future procedures in this regard" [ii]‐‐ were temporary moves seeking to pressure Hamas to hand over control over the small coastal enclave to the PA.

This is a grave and unjustifiable infringement on academic freedom without any fair or logical basis, as it must be pointed out that the University staff in the Gaza Strip are not Hamas‐appointees. As is the case with university lecturers and administrative staff at universities all over the world, the staff are either completely apolitical or have individual political allegiances to a plethora of different organisations or parties which are not related to their work in any way.

Following the announcement of forced early retirement, the academics then wrote to the President of the European Commission, Jan Jonker, to protest this draconian action. On 26 August 2017, the Palestinian academics were then suddenly informed that they would be “re‐hired” (even though their forced retirement had not yet taken effect).

However, they were told by the Palestinian Authority that they would only be paid their monthly pensions, which are a tiny percentage of their actual salaries. So, effectively the academics have been forced into early retirement but are still expected to work &dash for a fraction of their former salaries.

Many of Gaza's academic staff have outstanding academic qualifications from international universities all over the world, have returned to Gaza to make a contribution to the education of young Palestinian school leavers, and are under the age of 50. All of these unethical decisions were made by the PA without formally informing the employees, in a move meant to humiliate them for no apparent reason.

All measures taken against civil servants based in the Gaza Strip amount to a form of collective punishment [iii] based on a policy of exclusion of a particular component of the Palestinian people. They have also been strongly condemned by major Palestinian human rights organisations.[iv] None of these staff have ever requested early retirement or to have their salaries slashed down to pension level, or 10&percnt or 15&percnt or to any tiny amount unilaterally decided upon by the Palestinian Authority. It is obvious that the university staff cannot continue surviving on a tiny fraction of their salaries as these reduced payments are now in their sixth month.

We are extremely concerned about the fate of the 26000 students who attend the universities, university colleges and other tertiary institutes in Gaza. These students quite literally have absolutely no other institutions in which they can receive a tertiary education.

We are very concerned that the Palestinian Authority is effectively dismantling all tertiary education in the Gaza Strip, and that if they are allowed to do this, they will begin a concerted attack on secondary and primary education in Gaza.

It is a heinous action to deprive predominantly young people of their inalienable right to education and we appeal for urgent intervention. This action of educide must be seen in the light of the brutal 69 year old occupation and colonisation of Palestine by the Israeli regime and the ongoing and barbaric Israeli siege of Gaza, which includes a total ban on imports of basic goods and exports of all Palestinian goods, severe restrictions on construction materials and cooking gas, and the obstruction of hundreds of gravely ill Palestinians every month, who have been referred for medical treatment to Israeli or West Bank hospitals, according to the Gaza‐based Palestinian Committee for Human Rights.

Palestinians in Gaza have also suffered tremendously this year with the Palestinian Authority's decision to cut off electricity to the Gaza Strip, with 2 million Palestinians who already received only a tiny four hours a day of electricity, being completely disconnected. This disconnection led to the deaths of more than 25 terminally ill patients including toddlers, in hospitals that were left without power, as well as the breakdown of sewage pumps, and a mass outflow of sewage into the sea as a result, according to the UK‐based NGO Medical Aid for Palestinians (MAP).[v]

No human being can live without clean water, electricity, food or education, or freedom of movement. We fear that if there is no international intervention against the Palestinian Authority over the forced retirement of all university staff, it is likely that the PA will move to terminate all secondary and primary education staff too, effectively shutting down the entire education system for 2 million people.

We call on you to reverse the punitive measures against the Gaza Strip, in general, and against the education and health sectors in particular, as these measures punish the civilians and threaten their lives in a way that violates all international norms and conventions that lay down obligations on governments to respect human dignity.

We demand that the Palestinian Authority cease their punishment of Palestinian university staff in Gaza, permanently revoke any threat of forced early retirement, pay the full salaries with immediate effect and back pay the staff the salary amounts that have been confiscated since April 2017.