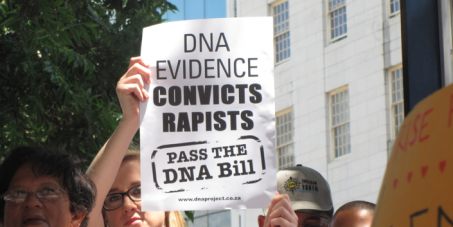 South Africa has one of the highest crime rates in the world, yet one of the lowest rates of conviction — it also has one of the highest re-offending rates globally. The expansion of a National Forensic DNA Database has the potential to change this situation in South Africa, but it cannot be achieved unless we have enabling DNA legislation to do this. Laws which make it mandatory for all arrestees* and convicted offenders' DNA profiles to be entered onto a DNA database (*and removed if the arrest does not result in a conviction) in order to search them against crime scene profiles collected from crime scenes, will increase the chances of matching perpetrators to their crimes as well as identify serial offenders earlier. Being one of the most exact and scientifically objective forms of evidence available today, DNA evidence in conjunction with a Forensic DNA Database will revolutionise crime scene investigation in South Africa and increase the number of convictions secured. That means it will be possible to prevent many of these crimes, save more lives, and provide protection to the innocent.

The DNA Project, a non profit organisation, has been fighting tirelessly for the promulgation of DNA specific legislation in South Africa since 2005. A draft Bill which has been in Parliament for the last 5 years, was finally approved by Cabinet in April 2013 and formally introduced into Parliament on the 8 May 2013. If passed, this Bill, officially known as the Criminal Law (Forensic Procedures) Amendment Bill B09-2013, will have a profound impact on the criminal justice system in South Africa. Read more about the work we do on www.dnaproject.co.za

If you believe that our Government should pass this vitally important legislation, then please show your support and sign this petition today.

The Forensic DNA profile held on a Database in addition contains no private information about a person other than the person’s gender. In other words the DNA profiles are stored on the DNA Database by using markers from the non-coded regions of a person’s DNA which ensures that no genetic disposition or other distinguishing feature may be read from that profile other than gender. The retention of the profile, in that form, is the same as a fingerprint, and therefore its retention does not impact on the privacy of the individual in any way whatsoever. If one looks at developed DNA Databases throughout the world, two things become clear: one is that the DNA profile itself has never been challenged as an invasion of privacy precisely because it is accepted that it does not contain private information about that person other than gender. And two, there exists a regulatory framework to govern the retention and expungement of DNA Profiles on a Database.

The inclusion of a DNA profile into the DNA Database at the time of arrest is important because:

1. it quickly includes or excludes a suspect from the investigation: a DNA profile is an objective and reliable science and the DNA profile either matches the crime scene profile or it doesn’t.

2. it allows the SAPS to search that DNA profile against the crime scene profiles collected from other crime scenes – this will quickly identify a serial offender. We can’t imagine that in our country which has one of the highes rates of recidivism (re-offending rate) in the world, that the identification of serial offenders would not be supported given that it may save future lives by preventing that person from continuing to commit further crimes…?

3. the entry of the arrestee’s DNA profile onto the Database is an investigative lead, not a criminal record, and as mentioned above, will be removed after a specified period of time if the arrest does not result in a conviction.

Consider the follwoing case from the USA – this is not from CSI, it is a true story, and there are countless stories like these – which is why we need to ensure that proper laws are put into place in South Africa to prevent this from happening here – and it will happen if we don’t allow DNA profiles to be taken at the time of arrest:

Chester Turner was arrested 21 times over the period of 15 years without ever being convicted of a crime that would allow his DNA profile to be uploaded into the DNA database. When he was finally convicted of rape and his DNA profile was uploaded into CODIS, it matched to the crime scene DNA found on 12 raped and murdered women. The first of these women was murdered less than two months after his first felony arrest. Her name was Diane Johnson. He went on to murder 11 more women. Had Turner’s DNA been taken upon his first felony arrest, crime scene evidence from Diane Johnson could have matched Turner’s CODIS profile and 11 women might have been saved. To compound this tragedy, a man name David Jones was wrongfully convicted and spent 11 years in prison. One cheek swab could have saved 11 lives and kept an innocent man from spending 11 years in prison. And recently Turner was linked to three more murders, bringing the lives that could have been spared to 14.