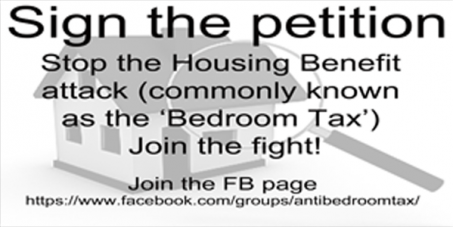 By continuing you agree to receive Avaaz emails. Our Privacy Policy will protect your data and explains how it can be used. You can unsubscribe at any time. If you are under 13 years of age in the USA or under 16 in the rest of the world, please get consent from a parent or guardian before proceeding.
This petition has been created by Paul H. and may not represent the views of the Avaaz community.
x

The Welfare reform Bill due to come into force in April, 2013 includes Housing Benefit reforms (commonly known as the ‘Bedroom Tax’) that will affect almost every family across the country. Government claims pensioners will not be affected are misleading. From October, 2013 if a pensioner’s spouse is not of pensionable age, they will be required to claim the new Universal Credit and be subject to this loss of benefit as well as their pensions.

It is unclear how a pensioner will be affected with working age children at home.

It will affect the low waged who are in receipt of housing benefit; they will have their benefit cut if they are ‘under occupied’.

It will not ease the housing situation, rather it is more likely to aggravate it because there is just not enough smaller accommodation to house the under occupier.

It doesn’t take account of a person’s status, which is they may have lived in and personalised their homes for 30 years or more, yet are now to be moved on or forced to pay money they will not be able to afford.

Children and pensioners will be hungry or cold or both so that these extra payments can be met. Meanwhile, the government has done nothing to reduce tax fraud and loopholes that the very rich take advantage of; rather, it has reduced the highest rate of income tax for the richest. These are probably also the biggest under-occupiers in the land, along with MP’s, none of whom has said they will give up their taxpayer funded second home for something ‘more suitable’.

Today: Paul H. is counting on you